"The zombie virus is passed through saliva. So the less skin you're showing, the less there is to bite. Step two, hygiene. Zombies are attracted to the smell of human flesh."
―Spider-Man[src]

Zombies are a race of resurrected, undead or virally-infected humanoid beings hungry for flesh.

In 2023, during the battle of Westview, as Agatha Harkness watched what was going on from a distance, Wanda Maximoff sneaked from behind, casting an illusion into her head. Inside the illusion, Harkness was back in 1693 during her witch trial. She was tied to the middle wooden post, however the corpses of the witches of her coven were still laying on the ground. Maximoff then walked in and started explaining to her that the difference between them is that Harkness did this on purpose.

As Maximoff said that, the now-zombified corpses of the witches started to move abruptly, getting back up as Harkness begged to stop. However, then the zombified witches started looking at Maximoff instead, recognizing her to be the Scarlet Witch. They then grabbed Maximoff and tied her to the post, as Harkness stepped down from it. Harkness once again asked for her powers, promising to fix her pain. However, Maximoff refused and proceeded to blast off chaos magic, hitting the zombified witches, and then sprinting towards Harkness, breaking the illusion.[1]

In 2024, Peter Parker discovered that the Elementals he fought were just illusions created by Quentin Beck and went to Berlin to inform "Nick Fury" about the matter. However, Beck had already arrived there and was waiting for Parker. He trapped Parker inside an illusion, where he mocked and threatened him. Beck told Parker that it was his fault that Tony Stark died and created an illusion of a zombified Iron Man, which scared and disturbed Parker.[2]

"Because once Earth's mightiest heroes joined the infected, no one else stood a chance."
―The Watcher[src]

In an alternate universe, while stuck in the Quantum Realm, Janet van Dyne became infected by the Quantum Virus which turned her into a zombie. In 2018, when Hank Pym journeyed into the Realm to rescue her, he was attacked and infected, and brought the virus to Earth, quickly spreading across the United States of America.

Members of the Avengers, such as Steve Rogers, Tony Stark, Clint Barton, and Natasha Romanoff, arrived in San Francisco to handle the crisis, but became infected and turned into zombies themselves. The virus then spread on a global scale, transforming the majority of the human population into zombies. Other Avengers such as Wanda Maximoff and Sam Wilson also became infected. Members of the Masters of the Mystic Arts such as Doctor Strange and Wong became infected. Later, Happy Hogan, Sharon Carter, and Hope van Dyne were infected and turned into zombies as well. Even extraterrestrial beings such as Ebony Maw, Cull Obsidian, and Thanos were transformed upon becoming infected.[4]

"Oh, zombies, great idea!"
"It's not them, it's what came with the zombies."
―Thor and Doctor Strange[src]

Sometime later, all the zombies were transported via portal by another universe's Doctor Strange to an uninhabited planet on a different universe. The zombies included some deceased zombies who were somehow resurrected, such as Steve Rogers and Sam Wilson. Clint Barton was among them, as well as Wanda Maximoff. They had been sent as a distraction against Ultron. Ultron blasted all of them away, except Maximoff who confronted him and attempted to kill him. However, Ultron then used the Infinity Stones to obliterate the planet, killing her and the rest of the zombies.[5]

Zombies are recognized for their withered and decomposed appearance, as they are essentially reanimated corpses or humans infected with a virus that prevents healing, causes necrosis and nullifies pain. Although being nearly mindless in their hunger for human flesh, they are shown to remain capable of using equipment and abilities from when they were not infected. However, zombies aren't known for their durability, as shown when Zombie Captain America and Zombie Falcon were completely bisected by the Winter Soldier and Okoye, respectively. However they both used weapons made of Vibranium to do it and Barnes is an enhanced super-soldier so that could be how and why they were able to do this so easily. But some zombies can retain some level of consciousness if their hunger is satiated and/or if they possess incredible powers, the most notable and only example being Zombie Scarlet Witch, who was able to be contained by being fed people, but she was even able to express distress over Vision's dead body and when she was summoned to fight Ultron, after seeing that her powers did nothing to him, she was surprised and expressed an "uh-oh" face before her death.

All zombies infected by the Quantum Virus share a dislike for the frequencies emitted by the Mind Stone on Vision, as seen when the zombie horde situated outside Camp Lehigh did not mobilize due to Vision's presence. However when Vision removed it from his head, the zombies started to move into the facility.

However some creatures like Ants were seemly immune to the being infected shown when Hope used Ants to save Banner and devoured the zombies flesh and seemly ineffective to being turned into Zombies. 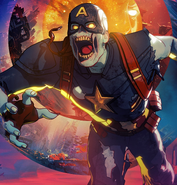 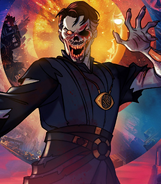 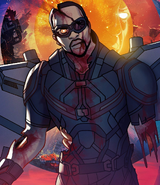 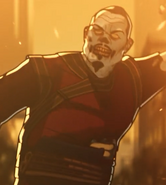 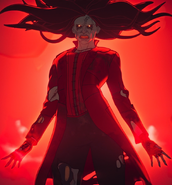 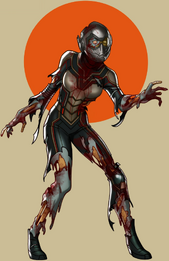 The Marvel Cinematic Universe Wiki has a collection of images and media related to Zombies.