The Zehoberei,[1] also known as Zehobereians or Zen-Whoberians, are a green-skinned humanoid race from the planet Zen-Whoberi.

The Zehoberei are the inhabitants of the planet Zen-Whoberi. Due to overpopulation, poverty and starvation was a commonplace issue across the planet, so much so that the planet became an early target of Thanos. The warlord and the Black Order obliterated half of the Zehoberei species and Gamora was taken in during Thanos' attack as his adoptive daughter and to become an assassin.[1]

In the years following the massacre, its remainder, according to Thanos himself, has lived in prosperity due to issues like poverty and wasting of resources becoming non-existent with a smaller population.[2] This claim is disputed by the Nova Corps' database, which states the race is now functionally extinct with Gamora as the last survivor.

The Zehoberei are a humanoid race distinguishable from Humans by numerous biological traits of note. Zehoberei skin is pigmented in pale green shades; their facial bone structure is differs from humans providing them with heightened cheek bones and angular features; their hair is typically dark and fades into a red gradient at the tips. In addition, the presence of a second liver allows Zehoberei to enjoy a larger number of alcoholic beverages than other races[3], and their skin tissue is substantially more resistant to physical harm.

While weaker than certain humanoid species, such as Asgardians, the Zehoberei's skin allows them to take far less damage from attacks and escalates their durability to an amplified rate. The increased tissue density also contributes somewhat to their physical strength. When Gamora was killed by Thanos, she appeared to have green blood, which is likely a shared trait with the rest of her species. 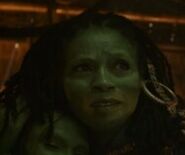