Two different interpretations of Ymir have appeared in video games set in the Marvel Cinematic Universe:

"Did you truly think you could harm me, Odinson? I am one of the ancients. Endless. Eternal."
―Ymir to Thor[src]

Ymir was the oldest and most powerful of the Frost Giants.

"Hello, Ymir."
"You require an answer, Loki. And my answer is yes! I will help you to defeat Asgard."
―Loki and Ymir[src]

In a scheme to make himself seem a more fitting heir than his adoptive brother Thor, Loki traveled to Niflheim and proposed an alliance with Ymir. Hoping to recover the Casket of Ancient Winters which Odin had taken from the Frost Giants many centuries ago, Ymir agreed to help Loki defeat Asgard.[1]

On Ymir's orders, the Frost Giants invaded Asgard, freezing Heimdall upon arrival. Thor led the Einherjar in the defence of the city and they were able to crush the invasion, but his friend Sif was fatally stabbed by one of the Jotuns. The enraged Thor desired vengeance for the death of his friend and strike back against the Jotuns. Despite Odin's warning that there were things on Niflheim that should not be disturbed, Thor traveled to Heimdall's Observatory, where Heimdall allowed Thor to pass, for he too sought justice for the Jotun attack. Using the power of Mjølnir, Thor activated the Bifrost Bridge and transported himself to Niflheim.[2]

"Time for justice, abomination. For gallant Sif, you will know the wrath of Thor!"
"You are far from home, Odinson. This is MY domain, and here you will fall..."
―Thor and Ymir[src]

Once Thor reached Niflheim, Loki urged him to defeat the Jotun warriors to draw Ymir into the open. Thor fought his way through the Frost Giants and called to Ymir to show himself. Ymir projected himself through the ice and mockingly challenged the Asgardian prince to find him. Thor eventually reached Ymir's citadel, but found his path blocked by a storm that he could not control. Loki alerted him that Ymir was using a Storm Spire to summon the storm. Thor destroyed the spire, extinguishing the storm and allowing him to enter the citadel.

Once inside the citadel, Thor declared that he would inflict justice upon Ymir and avenge Sif. Ymir warned the Odinson that he would meet his doom there. Thor smashed his way through Ymir's subordinates and the citadel's natural defenses, and the other Frost Giants backed away as their leader emerged to fight the intruder himself. Ymir engaged in an intense battle with Thor, who called down lightning from the heavens and caused Ymir to fall through the floor of the citadel. As Ymir plummeted to the bottom, Thor flew down after him and shattered him with Mjølnir once he reached the bottom.

Loki informed Thor that Ymir could not be defeated as long as he had ice with which to regenerate himself. He showed Thor to the Cave of Ages and told him that it contained a weapon so powerful that it could melt all of Niflheim. Ymir returned and warned Thor not to open the cave or all of the Nine Realms would suffer for it. Not believing him, Thor went to open it anyway. Ymir attacked Thor, vowing not to let him bring the Apocalypse. Thor opened the cave and unleashed Mangog, and the power the beast unleashed melted Ymir.[2] 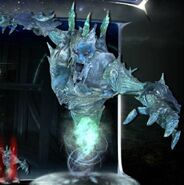 "Tiny godlings...You think to invade MY realm?! Time and time again, you cause my people to suffer...Now, it ends. Now, Asgard will FREEZE for it's arrogance!"
―Ymir[src]

Ymir was the oldest and most powerful of the Frost Giants.

"Ymir! This was the work of the Dark Elves, not Asgard! We seek not to fight with you this day."
"Whatever you sought...you found DEATH!"
―Thor and Ymir[src]

The powerful Uru weapon the Bloodaxe was stolen by the Dark Elves during an attack on Nidavellir. It was taken to Jotunheim, where Heimdall sent Thor and Sif to recover it. The two Asgardians discovered the Dark Elves using the Bloodaxe as part of a ritual. Ymir was guarding it and wanted retribution for the Frost Giants that the Asgardians had killed, despite Thor's insistence that the Dark Elves were the ones at fault. They defeated him and went back to Asgard with the weapon in tow. Sif and Heimdall both mocked Thor for the fear he showed when Ymir emerged from the wastes.[3]

Retrieved from "https://marvelcinematicuniverse.fandom.com/wiki/Ymir?oldid=1082116"
Community content is available under CC-BY-SA unless otherwise noted.