"This should be fun!"
―X-Ray before the U-Foes' battle against the Hulk[src]

James "Jimmy" Darnell, better known as X-Ray, is a member of the U-Foes. He is the brother of Vapor.

"The energy I'm using is more stable than Gamma Radiation. I'll be remembered as the man who brought the human race to the next stage of evolution. Your brother and Mike agree."
―Simon Utrecht to Ann Darnell[src]

James Darnell and Michael Steel supported Simon Utrecht in his attempt to recreate the Bio-Tech Force Enhancement Project using atmospheric radiation. Darnell's sister Ann was skeptical, as the experiment had only been successful once. Utrecht convinced her to help by insisting that the energy he was using was more stable than Gamma Radiation and by promising to share the rewards with his fellow contributors.

Once the experiment started, Rick Jones alerted Bruce Banner that the United States Army were on their way to arrest Utrecht. As the Hulk, Banner reached Utrecht Laboratories where he found an antennae on the roof that was generating massive amounts of radiation. He destroyed the antennae and the building, but Darnell and his fellow contributors emerged from the wreckage as the super-powered U-Foes. They decided to teach the Hulk a lesson and fought against him. They were defeated, but vowed to kill the Hulk if he got in their way again.[1]

X-Ray has the power to conduct massive amounts of radiation through his body. 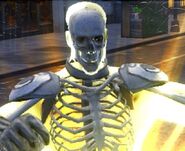 Retrieved from "https://marvelcinematicuniverse.fandom.com/wiki/X-Ray?oldid=1227623"
Community content is available under CC-BY-SA unless otherwise noted.