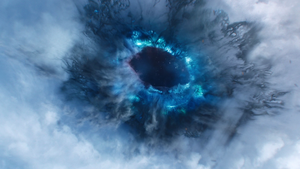 "An Einstein-Rosen bridge, also known as a wormhole. In layman's terms, a portal to another universe opening below the ozone layer."
―Phil Coulson to Nick Fury[src]

A wormhole (also known as an Einstein-Rosen Bridge) is a special portal or tunnel created to quickly travel from one place to another, no matter the distance between them. In physics, a wormhole is a hypothetical topological feature of spacetime that would be, fundamentally, a "shortcut" through spacetime.

"A lifetime ago, I too sought the stones. I even held one in my hand. But it cast me out, banished me here, guiding others to a treasure I can not possess."
―Red Skull to Thanos[src]

In 1945, when Red Skull took the Tesseract with his bare hand, the Space Stone within created a wormhole which transported him to Vormir.[1]

"An Einstein-Rosen Bridge – a theoretical connection between two different points of space-time."
"A wormhole."
―Erik Selvig and Jane Foster[src]

At the beginning of the 21st century, Jane Foster was researching wormholes and studied the possibility of them. During the Convergence, wormholes connecting the Nine Realms aligned and allowed for passage between them.[2]

"There was a wormhole in space and time beneath me. At that moment, I let go."
―Loki[src]

After Thor destroyed the Rainbow Bridge generating Asgard's Bifrost Bridge, the dimensional energy of the latter created a wormhole, causing Loki to travel throughout the galaxy before ending up at the Sanctuary, encountering Thanos and The Other.[3]

"A hostile alien army came charging through a hole in space; we're standing three hundred feet below it."
―Tony Stark[src]

When the Avengers battled the Chitauri in the Battle of New York, the invaders came to Earth through a wormhole created by the Space Stone inside the Tesseract.[4]

"The alignment of the worlds. It approaches, doesn't it?"
"The universe hasn't seen this marvel since before my watch began. Few can sense it, even fewer can see it. But while its effects can be dangerous, it is truly beautiful."
―Thor and Heimdall[src]

During the 2013 Convergence, many wormholes opened up around the Nine Realms, all coming together in Greenwich. Malekith attempted to use the Aether to destroy reality with these wormholes, but was stopped by Thor, Darcy Lewis, Jane Foster, and Erik Selvig.[5] In 2015, after the Battle of Sokovia, Hulk flew into space using the Avengers' Quinjet. After he came across a wormhole, it transported him to Sakaar.[6]

"Every generation has sent men through the portal, hoping to save or at least serve our leader on the other side."
―Gideon Malick to Grant Ward[src]

Since ancient times, the group that would later be known as HYDRA kept a Kree artifact:[7] a Monolith that was originally intended to defeat Inhumans,[8] and regularly sent human sacrifices through it to another planet to appease Hive, an exiled but powerful Inhuman.[7] During the War Against the Inhumans, the Inhumans become aware that S.H.I.E.L.D. had the Monolith and attempted to recover and destroy it.[8] After the war, S.H.I.E.L.D. kept it from the crippled Inhuman population of Afterlife. Agent Jemma Simmons was swallowed by the Monolith,[9] quickly prompting her partner Leo Fitz to track down every myth and every possibility surrounding the Monolith.[10] Eventually with the help of the Asgardian Elliot Randolph, S.H.I.E.L.D. managed to retrieve Jemma Simmons and caused the stone to explode.[11] However, Gideon Malick procured different fragments and, using the instruments within an English castle, created a wormhole for Grant Ward to retrieve Hive. Chasing Ward, Phil Coulson entered the Wormhole also.[12] Ultimately, S.H.I.E.L.D. led an Attack on the HYDRA Castle, retrieved Coulson and Fitz, who was also sent through the wormhole to Maveth, and destroyed the castle; however, Hive traveled through the wormhole, using the corpse of Ward.[13]

"What is this place? The answer is Sakaar. Surrounded by cosmic gateways, Sakaar lives on the edge of the known and unknown. It is the collection point for all lost and unloved things. Like you."
―Sakaar Computer to Thor[src]

When Thor and Loki dueled with Hela in the Bifrost Bridge, she managed to throw the two out of it and they both were caught in wormholes which brought them to Sakaar. Thor, together with Hulk and Valkyrie, escaped the planet by flying the Commodore through Sakaar's largest wormhole, the Devil's Anus, with Loki doing the same using the Statesman.[14]

"Where is he now? Where?"
"We don't know. He just opened a portal and walked through."
―Tony Stark and Steve Rogers[src]

With the Space Stone in hand, Thanos used wormholes as his primary method of transportation, opening portals to go to Titan, Vormir, Wakanda, and the Garden.[15]

While searching the whereabouts of Leo Fitz, Zephyr One used the Phase Harmonic Teleportation Device to create a wormhole to escape several Ionizer Missiles fired from a Confederate Destroyer Ship.[16]

Sometime after the Blip, a documentary was released called Nova: Einstein Rosen Bridges with Dr. Erik Selvig. It was an in-flight entertainment option during Peter Parker's trip to Europe in 2024.[17]

The Marvel Cinematic Universe wiki has a collection of images and media related to Wormhole.

Retrieved from "https://marvelcinematicuniverse.fandom.com/wiki/Wormhole?oldid=1160573"
Community content is available under CC-BY-SA unless otherwise noted.