Who You Really Are

Who You Really Are

"The changes may not be on the surface... but buried inside. You must understand, these creatures are weapons... abominations... even if they don't know it."
―Vin-Tak to Skye

Who You Really Are is the twelfth episode of the second season of the television series Agents of S.H.I.E.L.D..

Coulson and his team come to the aid of a confused Lady Sif, who has lost her memory after fighting with a mysterious warrior whose true mission will send shockwaves through S.H.I.E.L.D. Meanwhile, Bobbi and Mack continue to hide their true mission from everyone close to them.

When Vin-Tak comes to Earth investigating the activation of a Diviner, Sif was sent to apprehend him. Sif went to Portugal and encountered Vin-Tak. The two battled until Vin-Tak struck Sif with his memory-wiping Truncheon. During the fight, Sif managed to destroy a part of Vin-Tak's nitrogen-device. The fight drew the attention of S.H.I.E.L.D., and agents found Sif, who had lost her memory.

During S.H.I.E.L.D.'s investigation, Lance Hunter revealed to Leo Fitz and Alphonso Mackenzie that Phil Coulson invited him to be a permanent member of the organization. Hunter thought that Mackenzie and Coulson might have an uneasy relationship, but that joining would be good for him.

Meanwhile, Bobbi Morse and Skye searched a hospital for Vin-Tak, encountering him in the supply room. Morse tried to confront him, but the Kree threw her into a wall. When Skye pulled her gun, she saw it shake in her hand as her agitation started an earthquake that dropped shelves and allowed the Kree to escape.

When the team got back, Skye confided in Fitz, saying that she could not control her powers. Fitz told her that he would use her blood sample to try to create an antidote.

Sif and the team figured out the connections between the Kree word "Kava" and the Portuguese city of Chaves. When they reached Chaves, they discovered Vin-Tak pulling a chest from a cave. The team apprehended him with new technology.

At the Playground, Vin-Tak explained the relationship between the Kree and the Inhumans, and what his government would do if the Inhumans were revealed. He viewed the Inhumans as abominations deserving to be destroyed, while Skye listened to him with growing fear. As a sign of good faith, Vin-Tak used his Truncheon to restore Sif's memories. Vin-Tak revealed that the box he recovered should contain the Diviners his people had left behind.

As Fitz and Jemma Simmons were opening the container found in Portugal, Simmons discovered the lab work that Fitz was doing on Skye. She asked what it was but Fitz lied, saying that it was a simulation of an Inhuman's blood. They returned to open the box; when it was found to be empty, Simmons told Coulson, forgetting about the blood samples in the process.

In another section of the Playground, Mackenzie told Morse to end her relationship with Hunter, citing that his being a S.H.I.E.L.D. agent will cause problems between their mission and him. Morse did so, but reluctantly.

Vin-Tak and Sif asked Skye what she had seen at the Kree City during Raina's transformation. Skye's agitation caused an earthquake that shattered a window, which caused Sif and Vin-Tak to form an uneasy alliance to destroy her. Melinda May took Skye and ran to Vault D. She attempted to calm Skye down, but the arrival of Sif only agitated Skye more. Eventually, fearing that her quake would harm her friends, Skye shot herself with May's I.C.E.R.; this action convinced Sif that Skye could be handled by her own team.

Elsewhere, Morse, Hunter, and Mackenzie saw the chase and challenged Vin-Tak. The Kree easily dispatched Mackenzie and Hunter and laughed at Morse, taunting that she lost their previous encounter. Morse revealed that she was only the distraction as Fitz fired the Destroyer Armor Prototype Gun. The blast knocked Vin-Tak down and Morse used his own Truncheon to wipe his memories.

While Coulson and May escorted Sif and Vin-Tak away from the Playground for their departure, the others cleaned up the mess that Skye caused with her earthquake. Simmons could not believe that Fitz lied to her and told him so; Fitz noted that she lied to him first when she went undercover. Ultimately, an argument began that pitted everyone against Fitz as to how dangerous Skye was. Skye silently listened to the quarrel, then left to shut herself into the cage on the Bus.

Shortly after, Hunter approached Mackenzie, asking for full disclosure as to what relationship Mackenzie had with Morse. Hunter told him that he knew about the flash drive and the lies that Morse had told. Mackenzie panicked and put Hunter in a sleeper hold. Mackenzie laid the unconscious Hunter down next to the S.H.I.E.L.D. SUV, regretting his action. 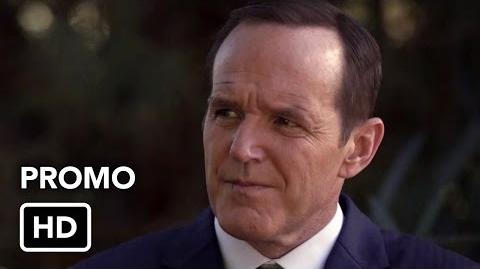 Marvel's Agents of SHIELD 2x12 Promo "Who You Really Are" (HD) 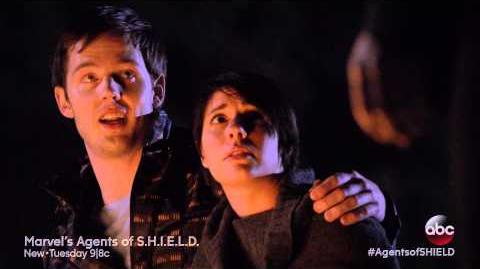 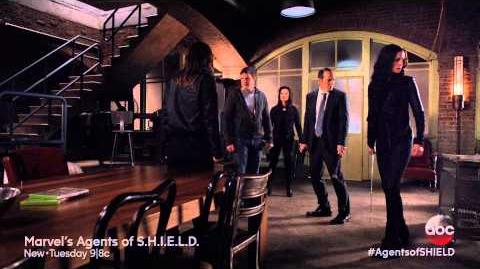 The Marvel Cinematic Universe Wiki has a collection of images and media related to Who You Really Are.