"I built everything around you and now you're not there. You have Pam and I have nothing."
"I'm sorry."
"Well, I'm going to have to ask you to say that with cash."

Doctor Wendy Ross-Hogarth was the wife of Jeri Hogarth. She began an aggressive divorce proceedings against her wife when she learnt she had begun an affair with her secretary Pam. As the proceedings went underway and Ross-Hogarth attempted to take her wife's money from her, she found herself confronted by both Hogarth's lawyers and Jessica Jones until she became enthralled by Kilgrave who ordered her to murder her wife. Eventually, she was stopped by being accidentally killed via her wife's lover.

"Our senior year, during finals, I met Wendy in the stacks, okay? I went down on her in the library bathroom that same night. We slept together for three months before you found out. It was the challenge, the thrill of of having you both."
―Jeri Hogarth to Kith Lyonne[src]

Wendy Ross-Hogarth was a physician in Thompson Square Free Clinic.[3]One evening, Ross was taken to a restaurant for a dinner date with Jeri Hogarth. Ross was eating a tiramisu dessert when she nearly choked by nearly ingesting an engagement ring that Hogarth had placed inside. Ross accepted the proposal and chose to build a life with Hogarth, changing her last name through hyphenation.[4] During their marriage, Wendy used her meager pay from work to help Jeri pay for law school.[1] For their tenth wedding anniversary, Wendy took her wife to Paris to celebrate, but Jeri stayed constantly on the phone with a client.[5]

Ross-Hogarth met Jeri Hogarth at the reception desk at the office of Hogarth, Chao & Benowitz after Hogarth finished work for the day. She gave her wife a kiss and put her arm around her as they left.[6]

Ross-Hogarth discovered that her wife Jeri Hogarth was having an affair with her secretary Pam. She called the Hogarth, Chao & Benowitz Office to speak to Hogarth but Pam said that she was in a meeting. Ross-Hogarth insisted and told Pam that she knew about the affair they were having.[7]

Jeri Hogarth filed for divorce and asked Desmond Tobey to be her lawyer; however, Wendy felt that they were only having a misunderstanding and that their marriage was strong enough to handle this incident.

While at Thompson Square Free Clinic, Ross-Hogarth was told that there was a patient waiting to see her; she was surprised to see Jessica Jones. Jones wanted access to a powerful sedative, insisting that it was to stop a dangerous man. Ross-Hogarth refused to listen to her, so Jones tried offering her help in her divorce case. The doctor responded by writing Jones a prescription for anti-psychotics.[3]

After having lunch with a friend and giving him a goodbye peck on the cheek, Ross-Hogarth was exiting a restaurant and saw Jeri Hogarth and Pam soon to enter; Ross-Hogarth was upset that her wife was bringing her lover to the place where they got engaged. Ross-Hogarth asked her if she had forgotten that memory; when Hogarth said she had not, Ross-Hogarth turned to Pam, taunting her by saying that she was getting romantic leftovers, and how Hogarth proposed to her at that restaurant. Hogarth told her wife that they were not reconciling, no matter what schemes she used. Speechless, Ross-Hogarth left the scene.[4]

One evening while leaving the Thompson Square Free Clinic and going to take the subway home, Ross-Hogarth was approached by Jessica Jones who wanted her to sign the divorce papers that she had in hand from Jeri Hogarth. Jones grabbed the physician and dangled her above the railroad tracks as a train approached; however, Jones' grip slipped, and Ross-Hogarth fell onto the tracks. Jones saved Ross-Hogarth before the train could kill them both.[8]

The meeting was interrupted by Pam, who called Hogarth out to answer a message from Jessica Jones. Ross-Hogarth mocked Pam for addressing her so formally, asked her if she calls her Miss Hogarth while they are in bed together. Hogarth left the meeting, telling Tobey that he could take it from now, since he knows what she wants. In the end Tobey was unable to convince Ross-Hogarth to change her desires.[9]

"You can't just barge in here and demand–"
"I am your patient. Get your medical bag and fix me!"
―Ross-Hogarth and Kilgrave[src]

One day, when Ross-Hogarth answered the door, she was surprised to see her wife holding a man with a gunshot wound in his shoulder. As she protested against Hogarth entering her home, she was put under the man's mind control when he asked her to perform first aid on his injury. Without hesitation, she retrieved her equipment and began tending to his wound.

She managed to patch up the man's wound and stood by waiting for more orders as he talked to Hogarth. She witnessed Jeri answering a phone call.[5]

While Kilgrave was listening to a phone conversation and Ross-Hogarth was packing away her medical equipment, a knock was heard at the door of the Hogarth Residence and Kilgrave panicked, thinking it was Jessica Jones coming to kill him and decided to flee. As he exited, he told Ross-Hogarth to repay Jeri Hogarth for her pain by killing her with a thousand cuts. Ross-Hogarth took a knife and counted every time she cut Hogarth as she chased her across her living room.

During the confrontation, Pam forced her way into the house and saw Ross-Hogarth sitting on top her lover cutting her skin repeatedly; Pam took a vase and struck the physician in the head. The concussive force caused Ross-Hogarth to fall into a glass coffee table, the sharp corner of which pierced the left side of her head. The blow and the resulting impalement killed Ross-Hogarth instantly while everyone in the room looked on in horror as her blood dripped onto the floor and her dead eyes stared blankly at nothing.[5] 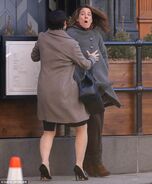