The War Beast was a creature used by the Rock Trolls of Nornheim.

Thor realized that he needed to reach Frostgrinder to leave Vanaheim when he was stranded by Loki, as he needed to find a way to defeat Mangog. He faced opposition from the Rock Trolls of Nornheim, who had been exiled there.

He defeated most of them, at which point their leader Ulik commanded that the War Beast be unleashed. Thor defeated this powerful creature and made his way to confront Ulik.[1] 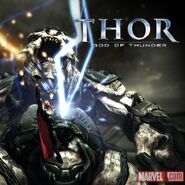 Retrieved from "https://marvelcinematicuniverse.fandom.com/wiki/War_Beast?oldid=278602"
Community content is available under CC-BY-SA unless otherwise noted.