Marvel Cinematic Universe Wiki
Register
Don't have an account?
Sign In
Advertisement
in: Articles to be rewritten, Characters, Guardians of the Galaxy (film) Characters,
and 10 more

Vorker was a member of the Yondu Ravager Clan under Yondu Udonta's leadership.

During the preparation of the Battle of Xandar, Vorker attended the meeting where the Guardians of the Galaxy explained their plan. When Rocket Raccoon told the assembled Ravagers that they needed Vorker's eye to defeat Ronan the Accuser. Vorker looked around confused until Star-Lord convinced Rocket that they didn't need his eye. During the battle, Vorker joined Kraglin Obfonteri in their M-Ship to battle against Ronan's army of Sakaarans and attempt to stop the Dark Aster from landing.[1]

"That's Vorker's eye. He takes it out when he sleeps. Go on, try again."
"But leave the eye here."
"What?"
"He's going to wake up tomorrow and he's not going to know where his eye is!"
―Yondu Udonta and Rocket Raccoon[src]

Vorker sided with Taserface during his mutiny. When the crew slept, his prosthetic eye was stolen from him by Groot due to a communication error. He was killed when Yondu Udonta blew up the Eclector.[2] 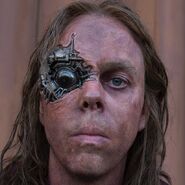