For each new episode of What If...?, please wait until a proper differentiative is decided prior to creating character articles.

View source
watch 03:36
Wiki Targeted (Entertainment)
Do you like this video?
Play Sound

Daredevil
*In the Blood
*World on Fire (mentioned)
*Condemned (mentioned)

"Tell... Mr. Fisk... that if he wants a pound of flesh, he can come here and carve it himself."
―Vladimir Ranskahov[src]

The Veles Taxi Garage was the headquarters for Veles Taxi, a taxi company that served as cover for Russian Mafia's drug distribution business.

Russian Mafia members worked at the garage preparing stolen cabs and painting them with the Veles Taxi sign, in order to use them for their drug distribution business.

James Wesley arrived at the garage to speak with Anatoly and Vladimir, and he remarked on Anatoly's wounds as soon as he saw them. Anatoly said that he had had worse wounds before. After jokingly advising him to duck the next time, Wesley informed the brothers that Leland Owlsley had finished the needed procedures to transfer all of Prohaszka's holdings in the company Kitchen Cab to the one that the Russians control, Veles Taxi.

Anatoly asked Wesley to tell his employer that they were grateful, but he answered that what his employer really cared about was the fact that the man in the black mask had damaged their operations again, and they had not stopped the man despite having promised to do so.

The brothers revealed that the man in the mask was questioning their men about Wesley's employer, by name, somehow having managed to discover it. Wesley said that it was one reason more to settle the situation, and that both Madame Gao and Nobu Yoshioka have expressed their disappointment towards the way this had been handled.

Wesley also revealed that there had been discussions behind their backs on how to handle the situation. Vladimir attempted to end the conversation, but he felt insulted when Wesley said their operation was weak. Wesley clarified it was not a personal matter, but their distribution directly affected other businesses they were all involved in.

Wesley informed them that his employer would help them with certain duties regarding their business, something that the Ranskahov brothers understood as an attempt to take over. Wesley then explained that, though their services were valuable, they needed help to provide them.

Vladimir threatened Wesley, ordering to tell Wilson Fisk, defiantly saying his name despite being told not to, to come in person to take over. Wesley then clarified that it was just an offer, not an order, and they needed to choose how to proceed. Wesley asked Vladimir to discuss it with Anatoly, and departed saying that they would be in touch.

As Wesley left, Vladimir and Anatoly discussed how to deal with the threat and the man in the mask, with Vladimir assuring his brother that the only reason Fisk did not want anyone to say his name was to not acknowledge the fact that he was just a man.

They agreed to question Semyon, one of their subordinates that was in a coma after investigating the man in the mask, going to the Metro-General Hospital to wake him up even if that meant killing him.[1]

Claire Temple was taken to the Veles Taxi Garage under orders of Anatoly and Vladimir Ranskahov, in order to obtain any information that she may have known about the man in the black mask. Her kidnappers, Sergei and Dmitry, tortured and hit her, but she didn't tell them anything.

Sergei told Temple that Dmitry would stop hitting her if she revealed who the man in the mask was, but she told them that she simply did not know who he was. Sergei swung with a baseball bat, seemingly going to attack her, but he broke the window of the taxi right behind Temple, making her scream in horror. Temple, scared, told them that the man in the mask never told her his name.

Dmitry stopped Sergei from hitting Temple with the bat, reminding him that Vladimir had ordered them not to kill Temple until she revealed everything she knew. Sergei then told Temple that torturing her was not giving him any pleasure, but he had been ordered to do it, so he needed her to answer the questions, or he would break her piece by piece.

Suddenly, all the lights at the garage went off, and Sergei ordered one of his men, Mikhail, to check what happened. Mikhail was then attacked by the man in the mask, who had come to rescue Temple, and he easily knocked him down. Temple began to laugh and taunted Sergei, telling him to ask the man in the mask what his name was.

The man attacked and disarmed another Russian thug, and Temple hid under a taxi as soon as the Russians began to shoot blindly. The man continued to knock the Russians down until only Sergei was left. Sergei took Temple as a hostage hoping to escape, but the man in the mask ordered him to let her go.

Sergei threatened to kill Temple if he could not escape, but the man in the mask told him that if he did not put his gun down and let Temple go, he would never be able to hold anything with his hand again. The man then attacked Sergei, quickly liberating Temple and breaking Sergei's arm in the process. He also taunted Sergei, asking him how it felt to be in pain and afraid just like Temple had been because of him, until Temple hit Sergei with the baseball bat he had been using.

Temple began to cry, and the man in the mask embraced her to calm her down, as he had rescued her and he was there for her.[1]

Vladimir and Anatoly Ranskahov returned to the garage with some of their men and found Sergei, Dmitry and the rest of their subordinates lying in the ground. Vladimir quickly asked Sergei, who had just regained consciousness, who had done it. Sergei told the brothers that it was the man in the black mask.

They were interrupted by Piotr, who called Anatoly to inform them that he had finally located Wilson Fisk at a restaurant. Anatoly tried to convince his brother that they needed Fisk's help, but Vladimir refused to bow down to him.

Anatoly then left, saying that he would go to meet Fisk and bow down for both of them, finally convincing him to accept the deal, while Vladimir stayed at the garage.[1] 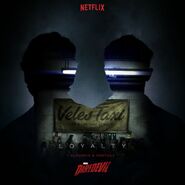