"Simon Utrecht is a ruthless businessman. I almost contacted him when I first started searching for a cure, but decided to stear clear. I hope he's not testing radiation on himself. He has no idea what he could become."
―Bruce Banner[src]

Doctor Simon Utrecht, better known as Vector, is the leader of the U-Foes.

"That monster destroyed the antenna, but look at us! The procedure worked! We've evolved."
―Vector[src]

Simon Utrecht was a scientist and a ruthless businessman. Bruce Banner almost contacted him when he first began searching to cure himself of the Hulk, but decided to steer clear.

Samuel Sterns recommended that Bruce Banner contact Utrecht, as he had read about Utrecht's research and thought it sounded similar to Banner's. This turned out to be true, as Utrecht was attempting to recreate the Bio-Tech Force Enhancement Project using atmospheric radiation. Utrecht managed to gain the support of Michael Steel and James Darnell. Darnell's sister Ann was skeptical, as the experiment had only been successful once. Utrecht insisted that the energy he was using was more stable than Gamma Radiation and promised to share the rewards with his fellow contributors. At this point, she agreed to help and insisted that Utrecht call her by her first name, suggesting an attraction between them.

Once the experiment started, Rick Jones alerted Banner that the United States Army were on their way to arrest Utrecht. As the Hulk, Banner reached Utrecht Laboratories where he found an antennae on the roof that was generating massive amounts of radiation. He destroyed the antennae and the building, but Utrecht and his fellow contributors emerged from the wreckage as the super-powered U-Foes. They decided to teach the Hulk a lesson and fought against him. They were defeated, but vowed to kill the Hulk if he got in their way again.[1]

Vector has the power of telekinesis to levitate objects near him. 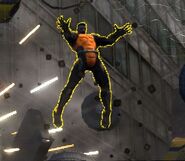 Retrieved from "https://marvelcinematicuniverse.fandom.com/wiki/Vector?oldid=1077664"
Community content is available under CC-BY-SA unless otherwise noted.