"I know you loved him... I loved him, too. But this won't bring him back. Howard, you are the one person on this earth who believes in me. I cannot lose you. Steve is gone. We have to move on... All of us. As impossible as that may sound... We have to let him go."
―Peggy Carter to Howard Stark

Valediction is the eighth and final episode of the first season of the television series Agent Carter.

Peggy faces the full fury of Leviathan, as Howard Stark makes his return in the explosive season finale of Marvel's Agent Carter.

It is the one year anniversary of V-E Day and the citizens of New York City plan to have an extravagant celebration in Times Square.

Meanwhile, Strategic Scientific Reserve agents Peggy Carter, Jack Thompson and Daniel Sousa are called by the New York City Police Department to help to investigate the deaths in the cinema theater. Sousa discovers the canister of the gas that caused forty-seven people to kill each other and accidentally inhales it. He attacks Thompson and hits Carter before being knocked unconscious. When he awakens, Sousa does not have a clear memory of what he has done; Carter explains to him what happened.

Carter questions the motives of Johann Fennhoff as Howard Stark reveals what happened at the Battle of Finow. It is decided that he will be bait to make the doctor appear. Things do not go as planned as Stark is kidnapped by a police officer under Fennhoff's thrall. Fennhoff has decided that victory over Stark is not killing him for his brother's death; victory is to have Stark deploy the Midnight Oil over Times Square and watch as the city is destroyed. Just as Stark begins to fly a plane, Carter's team arrives.

Carter fights Dottie Underwood and each woman is pushed to her limit; no clear victory is made, as Carter kicks Underwood through a window, but the assassin escapes. Sousa and Thompson go to capture Fennhoff; he takes Thompson by surprise and knocks him out. When Sousa enters the scene, Fennhoff uses his powers on him, telling him to kill Thompson with his drawn gun. Sousa pistol-whips Fennhoff as he removes his earplugs.

Carter is on the radio talking to Stark; if she cannot break his trance before he reaches New York to deploy the gas, Edwin Jarvis has orders to shoot Stark down. Stark tells Carter that his greatest victory was the creation of Captain America; he was going to bring Rogers home. Carter knew that that was the trance talking, but with calm persistence, she was not going to listen again as another loved one died. Carter told Stark to follow her as she let Steve Rogers go. He listens, and manages to break free of Fennhoff's vision, following Jarvis back to the warehouse.

After Johann Fennhoff's Revenge Plot was quelled, Carter receives a standing ovation from her colleagues in the SSR. However, Thompson receives the credit from the government. Carter decides that she no longer needs to seeks the approval of others to validate who she is. Sousa overcomes his shyness and asks Carter on a date. She takes a raincheck, but smiles as she thinks about it. As a reward, Carter is given one of Stark's houses to reside in permanently. Carter chooses Angie Martinelli to be her housemate. Carter takes the blood of Steve Rogers and says goodbye to Steve, pouring it out into the water under the Brooklyn Bridge.

Doctor Fennhoff is muzzled so that he can not speak. He is placed in a cell where his cellmate, none other than Arnim Zola, tells him that victory eluded them, but now they have time to think and plan. Zola asks Fennhoff to write down how his power works so that they may work together and succeed next time. 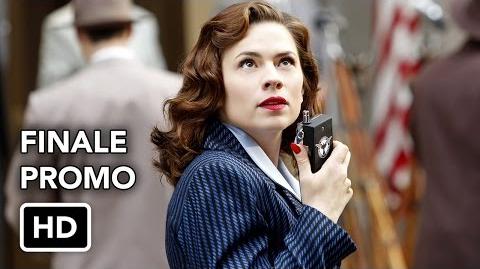 The Marvel Cinematic Universe Wiki has a collection of images and media related to Valediction.