"This country gave us freedom. But it's fragile. It needs protection."
―Dinah Madani[src]

The United States of America, commonly referred to as the United States, America, or simply the States, is a federal nation consisting of fifty American states, a federal district, and several self-governing territories. 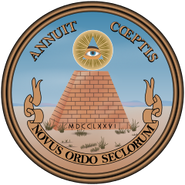 Reverse Seal
Add a photo to this gallery

Retrieved from "https://marvelcinematicuniverse.fandom.com/wiki/United_States_of_America?oldid=1317822"
Community content is available under CC-BY-SA unless otherwise noted.