"You know, when they first started Homeland, they wanted native speakers. Farsi, Pashtun, Arabic. Use the enemy to catch the enemy."
―Dinah Madani to Sam Stein[src]

"I just got back from Afghanistan. I was the Homeland Security attaché over there."
―Dinah Madani to Billy Russo[src]

In 2012, Dinah Madani was appointed the Homeland Security attaché to the United States Mission in the Middle East, particularly Afghanistan. Madani cooperated with Ahmad Zubair from the Afghan National Police on the investigation of the heroin traffic which was possibly linked to the American military. However, Zubair was killed by an unidentified military group, according to the footage Madani received from an anonymous source.[1] Before she could investigate, the footage was stolen and the Homeland Security pulled Madani out of Afghanistan.[2]

"I mean, his only source was this guy from Homeland who refused to go on record. And then Special Agent in Charge for New York, Carson Wolf, stopped by personally and asked me not to pursue it."
"So then the story is true?"
"According to him, if we ran the story, it would interfere with his investigation. He was afraid we'd screw up his chances of catching everybody."

Carson Wolf became aware that an anonymous Homeland Security agent leaked the information about a notorious hacker, known as Micro to New York Bulletin. Wolf personally met with Mitchell Ellison and demanded not to publish the article, claiming it would compromise their investigation.

Micro was eventually identified as David Lieberman, so Wolf led the group of Homeland Security agents to apprehend him, suspecting him in domestic terrorism. Lieberman attempted to flee from the agents, however, Wolf caught up to him and shot him in the chest, seemingly killing him. According to Wolf's report, Lieberman resisted arrest and had a weapon on him, so Wolf had to gun him down.[3]

Homeland Security was one of the agencies that tried to track down and capture Inhuman Lincoln Campbell.[4]

"FBI, Homeland Security. Whatever it is you stumbled onto last night, it's big."
―Jeri Hogarth to Jessica Jones[src]

As well as the FBI and the New York City Police Department, Homeland Security investigated a mysterious criminal activity in New York City.[5]

"The investigation you were pursuing in Kandahar was deemed to serve no one."
"Deemed by who?"
"Frankly, you must have a guardian angel, Madani. They pulled you out of there before you did your career some real harm."

Upon her returning from Afghanistan, Dinah Madani was transferred to the Homeland Security New York branch, under Carson Wolf's command. Wolf ordered Madani to abandon the investigation of Ahmad Zubair's death, however, Madani ignored his order and accessed the Homeland Security files on Ray Schoonover and Frank Castle, suspecting that they might have been involved. Madani came across of Billy Russo who used to serve with Schoonover and Castle in the United States Marine Corps and requested Wolf to organize a field training for Homeland Security and collaborate with Anvil, so she would have a chance to speak with Russo.

Madani, Sam Stein, and Homeland tactical unit were brought to the Anvil Training Facility for a field training with hostage incident. However, Stein hesitated with one of the hostages and Madani pulled him away and shot the hostile who covered behind them. After the end of the training, Wolf went to discuss the procurement and further cooperation with Russo, before Madani could question him.[2]

"This is going to be a jurisdictional cockfight. NYPD and FBI? They're both already trying to jump onboard."
"Screw 'em. He was one of us."
―Sam Stein and Dinah Madani[src]

Homeland Security was informed about the murder of Carson Wolf who was tortured and executed by an unknown assailant, but refused to give any statement to the press. The FBI and the New York City Police Department attempted to take over the case due to the jurisdictional issue, however, Homeland Security did not accept that.[1] During the investigation, Dinah Madani and Sam Stein discovered Wolf's bank records with six secret off-shore accounts which were used by Wolf to keep three million dollars.[3]

Wolf's corruption negatively impacted the New York DHS, and eventually the Office of the Inspector General took over the case. In the wake of Wolf's death, Rafael Hernandez recommended Madani as his replacement for the acting Special Agent in Charge of New York.[6]

"The operation was by the numbers and you ran it well. Right up until the point where you went Steve McQueen and had to do it all yourself."
"What was I supposed to do? I almost had the bastards."
"Instead, they almost killed you. The OIG is going to investigate."

Homeland Security received an intel that the Greek Mob was planning to transport a large weapon shipment through New York City, so Dinah Madani organized a tactical operation to intercept them on American soil. With Madani and Sam Stein in charge, Homeland Security set a sting operation at the Red Hook Pier, intending to apprehend the Greek Mob with Sampson posing as a weapon buyer. However, the operation was interrupted when Homeland Security's communications were hacked by an Micro which distracted the agents from the Greek Mob's weapons being stolen.

Madani attempted to follow the culprit, however, Micro crashed into her at full speed on the stolen Greek Mob's truck. The culprit, however, rescued Madani, so she was able to identify him as Frank Castle.[6] Later, was interrogated by the Office of the Inspector General about the operation, but Madani decided to keep Castle's involvement a secret.[7]

"I'm expecting our targets to come in armed and ready to fight. They believe they are there to capture a dangerous enemy. When they find us waiting instead, I don't expect them to come quietly. Okay? Schematics and assignments are in the folders before you. Study them and get ready. There will not, I repeat, not be a copy of this tactical plan online or anywhere else except right in front of you."
―Dinah Madani[src]

Dinah Madani and Sam Stein attempted to find other United States Marine Corps officers who could have been involved with Frank Castle. One of such officer was Gunner Henderson, who was later found dead in Kentucky woods. Homeland Security arrived there to investigate the shootings that took place there and Stein confirmed that Castle was there, as the blood samples on the scene matched his DNA.[8] Madani realized that Henderson was killed after she and Stein started to look into the Marines' files, and found out that her office was bugged by people who were after Castle.[9]

In an attempt to lure them out, Madani and Stein organized a fake tactical operation, according to which, Castle would be present at the Abandoned Warehouse. The Homeland Security tactical unit holed up at the warehouse where they ambushed a group of armed men in masks who came there to assassinate Castle. As a result of a firefight between them, four attackers and several Homeland Security agents were killed, as well as Stein who was stabbed by the group's leader.[10]

After the failure of the operation, Madani informed Rafael Hernandez that she had uncovered an conspiracy which involved the CIA, NSA, and the United States Armed Forces, with William Rawlins as a man in charge. Hernandez then showed her files on deceased mercenaries who attacked them at the warehouse, and Madani found out that they all were ex-Anvil agents. Madani suspected Billy Russo being involved in the conspiracy, as well as being responsible for Stein's death, however, he refused to answer her questions.[11]

"Bill Rawlins is a highly-decorated agent. But I'll look into it. Of course, I will. And if there's anything, you'll be the first to know."
"Well, this is a Homeland Security investigation."
"Well, I'm not sure what jurisdiction Homeland Security has over CIA agents' conduct on foreign soil, Agent Madani. And Rafi can tell you, we generally clean our own dirty laundry."
"It's not that simple, Marion. Several of our agents were killed in an operation not five miles from here. On US soil."

Dinah Madani and Rafael Hernandez requested the CIA Deputy Director Marion James to visit the Homeland Security Headquarters and informed her that Homeland Security discovered evidence that linked William Rawlins to the illegal assassination program in Kandahar funded by heroin sales. Madani claimed that Ahmad Zubair managed to discover the truth and Rawlins had him assassinated for that.

James denied any knowledge of his illegal actions, noting that Homeland Security does not have any jurisdiction over CIA agents' conduct, however, Hernandez told her that Homeland Security agents were killed on the American soil during the investigation. Regardless, James refused to cooperate, since Rawlins was a decorated CIA agent and the potential scandal of such proportion could put the American foreign policy back by ten years.[12]

"You want evidence proving William Rawlins killed Ahmad Zubair. You want a video. A video that I already sent you, which you carelessly managed to lose. A video that already got me killed once."
"Killed by who?"
"You want that video so that Frank Castle can point at himself on the screen and then point at William Rawlins and then say: "That's your guy". And then you want justice 'cause you haven't figured out that there is no such thing yet."

Eventually, Frank Castle and David Lieberman contacted Dinah Madani, agreeing to come clean about their involvement in the situation. Castle gave an official testimony, informing Madani about being a part of the Cerberus Squad founded by William Rawlins, as well admitting to killing Ahmad Zubair and Carson Wolf. Lieberman, however refused to testify since his family was abducted by Rawlins and Billy Russo, so he offered Madani a plan to rescue them.

Russo was eventually arrested after his confrontation with Castle at Central Park which also resulted in Madani being shot in the head. With Russo being taken into custody, Rafael Hernandez and Marion James redirected the narrative, deeming Rawlins and Russo the only culprits and removed Castle's DNA from the system.[14]

"The jurisdictions are clear. Russo is NYPD territory. Your agency agreed to that. Right around the time when they handed us their paperwork on a crime scene they trampled all over like they were doing us a favor, throwing us a bone."
―Brett Mahoney to Dinah Madani[src]

Homeland Security handed the Billy Russo's case to the New York City Police Department, as a part of their agreement. However, Dinah Madani refused to let go of the case, despite Russo's critical state after the Central Park incident which resulted in his memory loss. Brett Mahoney stated that Madani and Homeland Security are not allowed to interfere in the case due to the jurisdictional agreements.[15]

"Now as a part of his joint plea deal with Homeland Security and the German government, he's allowed to return to the U.S., provided he serve two years under house arrest, followed by three years of probation."
―Jimmy Woo to Cassie Lang[src]

Following his aiding to Captain America and escaping the Raft, Scott Lang and Clint Barton each made a deal with the German government and Homeland Security. As part of their deal, they were allowed to return to United States of America to be placed under house arrest for two years.[16] 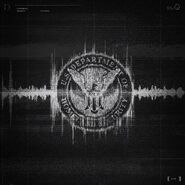