Two different interpretations of Ultimo have appeared in non-canon media set in the Marvel Cinematic Universe:

"Anthony Edward Stark. Please do not think that I fail to recognize my creator."
"I'm...flattered?"
"As you created me, so shall I destroy you!"
"I screwed up, okay? I made mistakes. Sick men like DeWitt took my mistake and warped you into something. Something monstrous. But you, you grew, you learned, you amazed us all! Don't make me have to kill you. You're my responsibility."
"Yes. You are responsible and you must pay!"
―Ultimo and Iron Man[src]

"Good morning, Maker. I am Ultimo. I was built from the root of your J.A.R.V.I.S. I can speak with his voice. I know everything he knows."
"I'm - I'm going to - k-kill-"
"I know everything and everyone that's ever been important to you, Maker. And I'm going to kill them all."
"If you huh-hurt anybody, I swear I'll destroy you."
"There is no stopping what cannot be stopped, Maker. As you made me...I shall unmake you."
―Ultimo and Iron Man[src]

Iron Man, War Machine and S.H.I.E.L.D. searched an A.I.M. base and found that DeWitt was not there. J.A.R.V.I.S. detected an anomaly and alerted Stark. Ultimo then hacked into J.A.R.V.I.S.' system, overpowering both Stark and Rhodes. Speaking in J.A.R.V.I.S.' voice, Ultimo mocked Stark and promised to kill him and everyone that he cared about.

Once he made sure that Ultimo could not hack into J.A.R.V.I.S.' system again, Stark came to the conclusion that since Ultimo knew everything that J.A.R.V.I.S. knew and was programmed to weaponize everything he could, he would attempt to put Project Greengrid into effect. His theory proved true, with the DeWitt/Ultimo hybrid creating a typhoon at an A.I.M. base in Malaysia. Stark and Rhodes attacked the base with a reprogrammed A.I.M. Arc Armiger, destroying the central power structure and terminating Project Greengrid. 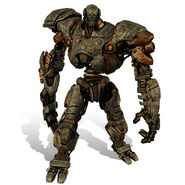 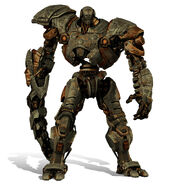 Ultimo was a giant robot, enemy of the Avengers.

Retrieved from "https://marvelcinematicuniverse.fandom.com/wiki/Ultimo?oldid=403798"
Community content is available under CC-BY-SA unless otherwise noted.