Lord of the Trolls

"For many years we have suffered, trapped in this land of our oppressors. No longer! Soon we will return to Nornheim in triumph!"
―Ulik[src]

Ulik was the leader of the Rock Trolls of Nornheim.

Centuries ago when the Rock Trolls were enslaved by the Vanir, Ulik attempted to lead an uprising against them.

Once Loki had succeeded in tricking his adoptive brother Thor into unleashing the terrible monster known as Mangog from the Cave of Ages on Niflheim, he set in motion the next stage of his plan to make himself seem a more fitting heir to the throne of Asgard. Traveling to Vanaheim, Loki struck a bargain with Ulik. Having been imprisoned on Vanaheim for centuries, the Trolls sought to return to Nornheim and Loki stated that he could help them do this by activating Frostgrinder, the Vanir's imitation of the Bifrost Bridge. He offered to do this on the condition that the Trolls distract Thor long enough for him to complete his plans. Ulik agreed to these terms.

Ulik rallied the Trolls and Skraelings to him and promised that they would soon return to Nornheim in triumph. When Thor reached them, Thor urged Ulik to stand down and let him use Frostgrinder to return to Asgard. Loki, having failed to defeat Mangog with the Casket of Ancient Winters, urged Ulik to let Thor use Frostgrinder as he knew that Asgard would be destroyed otherwise. Loki promised to send the Trolls to Nornheim once Asgard had been saved, but Ulik chided him for breaking their deal and declared that no one would be allowed to use Frostgrinder before himself. Ulik ordered his forces to kill Thor, but he defeated them. He then unleashed a powerful War Beast, which was no match the Odinson. Ulik fled inside Frostgrinder, urging Thor to follow him and settle their conflict.

As Thor entered Frostgrinder, Ulik attacked him and they engaged in an intense battle. Thor eventually overpowered Ulik, grabbed him by the leg, spun him around and threw him through the wall of Frostgrinder. Loki then transported himself and Thor to Muspelheim and destroyed Frostgrinder to prevent the Trolls from retaliating against them, and to cover his own tracks.[1] 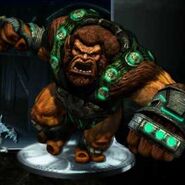 Retrieved from "https://marvelcinematicuniverse.fandom.com/wiki/Ulik?oldid=972119"
Community content is available under CC-BY-SA unless otherwise noted.