A biopic film based on the life of Tony Stark was written by Daniel Frank and directed by Iain McFadyen. It starred Simon Williams as Tony Stark alongside Mary Livanos, Sean Becker and Dexter Mills in other roles. 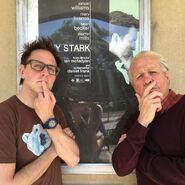 Retrieved from "https://marvelcinematicuniverse.fandom.com/wiki/Tony_Stark_(film)?oldid=1070200"
Community content is available under CC-BY-SA unless otherwise noted.