Marvel Cinematic Universe Wiki
Register
Don't have an account?
Sign In
Advertisement
in: Characters, What If...? Characters, Humans,
and 8 more

"Well, I saw young Americans killed by the very weapons I created to protect them. And I realized we have to do better, build bigger, and fight badder for them."
―Tony Stark[src]

Anthony Edward "Tony" Stark was a billionaire industrialist and the CEO of Stark Industries who was attacked by the Ten Rings in Afghanistan and saved by Erik Killmonger. Stark befriended Killmonger out of gratitude and worked with him on Project Liberator, although he was later betrayed and murdered by the soldier after he discovered his secret vendetta.

In 2009, Stark was being escorted by a few soldiers in Kunar until their humvee was attacked by the Ten Rings. Jimmy, Ramirez, and Pratt got out of the humvee to attack the Ten Rings soldiers, but they were shot down and killed. Stark escaped the humvee and hid behind some rocks, pulling out his phone to call for backup, but a missile landed right beside him. Luckily, Stark was saved by Erik Stevens, who grabbed the missile and threw it away.

A few days later, Stark would hold a press conference at the Stark Industries Headquarters alongside Obadiah Stane. Stark would be asked several questions, but he would be asked by another reporter if the experience changed him. Stark told Everhart that he saw young, American soldiers being massacred by his weapons and announced Stevens as Stark Industries' new head of security.

Christine Everhart would then ask Stark what happened in Kunar and questioned Stevens' intervention. Stark tried to assure Everhart that Stevens had no knowledge, but Stevens told the truth and stated that he was working undercover within the Ten Rings, exposing Stane's plan to assassinate Stark. To back his claim, Stevens presented documents he uncovered during his undercover work. An enraged Stark ordered security to arrest Stane as Happy Hogan knocked Stane out.[1]

Some time later, Stark would host a party at his mansion and had drinks with Stevens, offering him the job of COO. However, Pepper Potts questioned Stark as Stevens also had second thoughts. Stark was able to persuade Stevens to take the job as they had more drinks while Potts met with James Rhodes.

After the party was finished, Stark brought Stevens to his workshop as Stevens wondered about the Jericho Rifle. Stark would mention his father and asked if Stevens knew of his, but he responded that his father was killed in gang violence. Their conversation would lead them to Stevens mentioning his plans to develop automated combat drones, which Stark said he could help with. Soon, the two would begin their plans on Project Liberator as Stevens presented his design for the drones.[1]

Over the next few weeks, Stark would help Stevens construct the combat drones, using J.A.R.V.I.S. to analyze Stevens' fighting patterns and initating operations tests to make sure the drones would work. One day, J.A.R.V.I.S. told the two that the drones were being overheated as Stark suggested miniaturizing an Arc Reactor, though he dropped the idea. Stevens suggested using vibranium, though Stark told him the last pieces of vibranium were used during World War II. To Stark's surprise, Stevens presented him his family ring.

Stark would analyze the ring and discover its elemental composition, asking Stevens where he found it. Stevens would tell Stark that it could be found anywhere, but Stark had a guy who had easy access: Ulysses Klaue. Stark would present his plan to Potts the next day, but she would go against it. However, Stevens would agree to the plan and stated that they needed a cover with Stark coming up with James Rhodes as a main man since he was a military liason. Stevens would agree with the plan as it was set in motion a few days later.[1]

After learning of Rhodes' death at the hands of Stevens, Stark became drunken and enraged as he believed he was being used. Stevens would visit Stark in his mansion and show him the vibranium spear he had taken. Stevens tried lying to Stark about the incident, persuading him to help out. Stark turned off the news and got up, questioning Stevens about his allegiance as he showed him a hologram of what happened in the incident thanks to J.A.R.V.I.S..

Stevens threatened Stark to call backup, though Stark stood his ground, demanding justice as his mansion was set on lockdown. Then, Stark revealed that he had finished a finalized version of the Liberator drone and used it to fight Stevens, toying around with him. The drone attacked Stevens as he tried to shoot it down, but he was not able to. Stark mentioned that the drone had copied his fighting style, to which Stevens retorted by changing his fighting style. To Stark's surprise, Stevens, with the spear, was able to take down the drone and throw it through Stark's shoulder.

Stevens walked towards Stark, revealing his chest scars as Stark pleaded with Stevens. However, Stevens pushed the spear deeper into Stark's shoulder and told him that he could not see their differences. Eventually, Stark died from his wounds and his body was recovered the next day.[1]

After Stark had died, Stark Industries, its assets, and its employees would work under Thaddeus Ross, who declared war on Wakanda for Stark's death. Ross would also go on to initiate Project Liberator as part of the United States military, resulting in the mass production of Stark Liberator Drones.

After the Invasion of Wakanda, a poster honoring Stark's legacy would be hung next to his former office at the Stark Industries Headquarters, where Potts would meet Shuri to discuss a plan to expose Killmonger.[1]

"You saved my life. I'd like to return the favor."
―Tony Stark to Erik Stevens[src]

Stark was a self-centered, arrogant person, caring for few people outside his closest friends. Seeing first hand how innocent people were being harmed by his weapons and business while he remained ignorant greatly enraged him, resulting in him being uncaring in killing his foes. The betrayal of those close to Stark led him to become enraged such as when Stane was exposed for working with the Ten Rings.

Stark was also reliable as he offered his help to Erik Stevens to undergo Project Liberator. Thankful for being saved, Stark would go on to be close friends with Stevens, though their friendship would be torn apart after he found out James Rhodes had been killed by Stevens.

"Welcome to Candy Land. I built everything in here myself."
―Tony Stark[src] 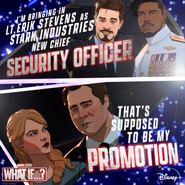