"Publicly revealing these items won't clear Mr. Stark's name. They'll only place you under suspicion along with him."
"Do you see the day I've had? I will call them in, and they will respect me."
"But they won't. They'll only use it to tear you down."
―Edwin Jarvis and Peggy Carter

Time and Tide is the third episode of the first season of the television series Agent Carter.

As Agent Carter closes in on Howard Stark's stolen technology, Peggy's secret mission could unravel when the SSR arrests Jarvis and a secret is revealed.

While trying to make sense of the symbol Leet Brannis showed her before he died, Peggy Carter pulls her gun on a guy scaling the wall leading into her hotel room. It was an honest mistake. The nimble fellow was looking for his girlfriend, Molly Bowden, who is kicked out of the Griffith Hotel the next morning for having a man in her room. Bubbly Dottie Underwood of Iowa is the newest resident at the Griffith. Her arrival comes on the heels of Carter blowing off Angie Martinelli, who just wanted to hear about her day.

Jack Thompson lets Roger Dooley know that Leet Brannis had his voice box cut out. He may also not be Leet Brannis, as a guy by that name died two years earlier. The other mystery person in their case is the Man in the Green Suit. The typewriter they find at his place may be some kind of long-range transmitter. Daniel Sousa reveals yet another lead. The license plate from the imploded car is registered to Howard Stark.

Carter must hide when Thompson shows up at Howard Stark's place. She is undiscovered, but Edwin Jarvis is brought downtown for questioning. The subject of treason is brought up. Jarvis was dishonorably discharged from the service. Thompson threatens him with deportation for both him and his wife, Ana. Carter fakes incompetence in a calculated move to pull Jarvis from the fire. Any respect she may have earned from her male colleagues up to now has been effectively obliterated.

Carter meets up with Jarvis at Stark's place to try to determine how someone broke into the vault. A discussion about Jarvis' past is broached, but not explored. At least, not at first. Carter needs to know about the treason charge. Jarvis forged the signature of a general in order to save his wife, Ana, during the war. Howard Stark also had a part in getting them out of a sticky situation. A deeper dive into the story gets put on hold when Carter and Jarvis see the symbol Brannis had drawn adorning a ship in the harbor.

Inside the mystery boat, Carter and Jarvis find some of Howard Stark's stolen inventions. The problem is they cannot publicly reveal this find. The only way to truly clear Stark's name is to do so from the shadows. Jarvis makes an anonymous call to Sousa tipping him off about the boat. Carter stays behind. She is attacked by a big brute of a man who has ties to Brannis. The guy gets the upper hand until Carter uses one of Stark's inventions, the Constrictor, to immobilize him. Then she uses a metal pipe to knock him out completely.

Agents Sousa and Ray Krzeminski find the unconscious brute and the stolen Stark goods. Chief Dooley orders the suspect to be brought back to the station. Zandow is about to spill details about who beat him silly to Krzeminski when someone slams into the car. Krzeminski gets out the driver's seat and is shot dead, as is Zandow.

The entire SSR office is mourning the loss of Agent Ray Krzeminski. Chief Dooley lets it be known that he would be alive today if not for Howard Stark. The millionaire playboy may not have pulled the trigger, but his actions led to the death of one of their own. A shaken Carter stops by the L&L Automat, hoping her friend would be open to hearing about her day. 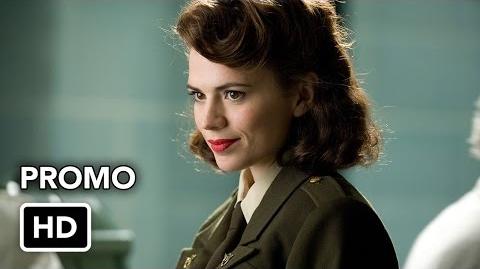 The Marvel Cinematic Universe Wiki has a collection of images and media related to Time and Tide.