Thor Odinson is a variant of Thor who was turned into a frog.

This version of Thor was transformed into a frog. However, in this timeline, Thor was never transformed back. As a result, he was designated as Variant T365 by the Time Variance Authority. He was then reset while encased in a glass bottle and ended up in the Void.[1] 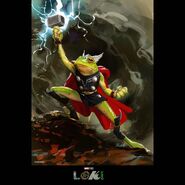