Thor: Love and Thunder is an upcoming superhero film, based on the Marvel Comics superhero of the same name. The film is a sequel to Thor, Thor: The Dark World, Thor: Ragnarok, and Avengers: Endgame and a prequel to The Guardians of the Galaxy Holiday Special and Guardians of the Galaxy Vol. 3. It is the twenty-ninth film in the Marvel Cinematic Universe and the sixth film of Phase Four. The film is set to be released on May 6, 2022.[4]

On January 11, 2018, it was reported by Marvel Studios News that Chris Hemsworth and Taika Waititi had talked about a potential sequel to Thor: Ragnarok.[15]

On April 17, 2019, Tessa Thompson revealed that there had been a pitch for a potential sequel to Thor: Ragnarok with Taika Waititi possibly coming back to direct the film.[16]

On July 16, 2019, The Hollywood Reporter reported that a sequel to Thor: Ragnarok was in development at Marvel Studios and that Taika Waititi would return as the director and that he would also write the script.[1]

On July 20, 2019, at San Diego Comic-Con 2019, Kevin Feige revealed that the title of the film would be Thor: Love and Thunder and that it was scheduled to hit theaters on November 5, 2021. It was also announced that Tessa Thompson will reprise her role of Valkyrie and that Natalie Portman will return as Jane Foster, who is set to become the goddess of Thunder, Mighty Thor, in the film.[17]

On August 7, 2019, Deadline reported that Taika Waititi had already completed the film's script.[19]

On January 4, 2020, Taika Waititi revealed in an interview that filming is expected to start in August.[20]

On January 6, 2020, Collider reported that Christian Bale was in talks to join the cast.[21]

On February 10, 2020, Variety reported that Jennifer Kaytin Robinson would write the script alongside Waititi.[2]

On March 6, 2020, Tessa Thompson revealed in an interview with Entertainment Tonight that Christian Bale will play the villain in the film.[22]

On March 9, 2020, Vin Diesel revealed in an interview with Comicbook.com that Groot, along with some of the Guardians of the Galaxy, would appear in the film.[9]

On July 25, 2020, Natalie Portman revealed that the film would begin shooting in Australia at the beginning of next year.[25]

On October 18, 2020, Chris Hemsworth confirmed in an interview that the film would begin shooting in January of next year and that Waititi was currently finishing up the script.[27]

On November 13, 2020, The Hollywood Reporter reported that Chris Pratt would reprise his Marvel Cinematic Universe role of Peter Quill/Star-Lord in the film.[6]

On November 20, 2020, The Hollywood Reporter reported that the scope of the film will have the likening to "an Avengers 5 feel" thanks to its ensemble cast.[28]

On December 10, 2020, during Disney’s 2020 Investor Day, Kevin Feige announced that Christian Bale would portray Gorr the God Butcher in the film and that the film would be released on May 6, 2022.[4] The next day, Deadline reported that Jaimie Alexander would reprise her role as Sif in the film.[7]

On January 8, 2021, The Daily Mail reported that Karen Gillan and Dave Bautista would be reprising their Marvel Cinematic Universe roles of Nebula and Drax the Destroyer, respectively in the film.[8]

On January 17, 2021, it was reported that Matt Damon had joined the cast of the film in an undisclosed role.[11]

On January 26, 2021, Chris Hemsworth confirmed that filming for Thor: Love and Thunder had begun.[29] 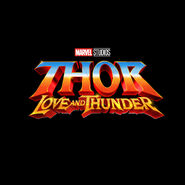 The Marvel Cinematic Universe wiki has a collection of images and media related to Thor: Love and Thunder.

Retrieved from "https://marvelcinematicuniverse.fandom.com/wiki/Thor:_Love_and_Thunder?oldid=1267989"
Community content is available under CC-BY-SA unless otherwise noted.