The Writing on the Wall

The Writing on the Wall

"It's all connected, everything. Ward has information about my father, who just happens to have the alien buzz kill device, which is somehow connected to the writing, which is related to the GH serum that is in our blood. Like we're pieces to a puzzle."
―Skye to Phil Coulson

The Writing on the Wall is the seventh episode of the second season of the television series Agents of S.H.I.E.L.D..

The team discovers murder victims with the alien glyphs on them that Coulson's been etching. All of Coulson's secrets and lies come to a head.

In upstate New York, Sebastian Derik is invited up to a Janice Robbins' apartment for a nightcap. He reveals the alien designs that adorn his chest and assures the young woman that they have met before. Derik pulls out a knife to help her remember. After finishing a carving, Skye shows Phil Coulson crime scene photos of her body which has been carved disturbingly with the alien symbols.

Coulson and Skye search the apartment of Janice Robbins, and find out she was a former S.H.I.E.L.D. agent with the name, Agent Rebecca Stevens. There are many images of the symbols painted on canvases. She has some pieces that are missing from Coulson’s design. Jemma Simmons performs an autopsy on the deceased agent. Both victim and the killer have GH-325 in their blood. It eventually turned them into psychopaths. Coulson believes the only way to get the answers they seek is to torture him to the point where the memories that were taken from him can return.

Grant Ward is spotted accessing one of his hot boxes where he has money and supplies hidden. Antoine Triplett has no choices but to let him walk as he has a dead man’s switch wired to lots of C-4 if anyone tries to take him down. Ward heads to Atlanta where he hops a bus to Dallas. Then he hops on one to Boston after making posing passenger Bobbi Morse as an agent. Lance Hunter, disguised as a cowboy, is already camped in the back of the bus headed to Beantown.

After being placed in the memory machine, Coulson sees himself in the interrogation room at the Guest House. Agent Stevens is across from him. Others agents are there, too. They are all in decent shape at first. Then everything changes. They all go mad except one, Derik. Derik just wants to know when he can get out of there. Coulson argues to shut down the rejuvenation program and destroy the host. The only hope is to erase the memories of the patients and let them start a new life; that is what they do.

A struggling Coulson is able to reveal the names of the patients. The killer is targeting those who went to that magical place of Tahiti. He was an assassin from the dark side of S.H.I.E.L.D. The only Tahiti patient he has not killed yet is a man named Hank Thompson. Coulson brings Skye down to the basement and tells her he wants to take care of Thompson personally. He then forces Skye into Grant Ward's cell and leaves.

Arriving at Thompson's house, Coulson holds him at gunpoint after a warning that his life is in danger. This is just before Sebastian Derik shows up and knocks them out from behind. Thompson wakes up bound and gagged in his workshop. His wife and son are locked in a closet. Coulson is also tied up. Derik, who has now gone crazy over the GH-325, lets him know that pain gives him back his memories. It’s how he found all the others from the Tahiti project. He wants to know what the alien writings mean and is willing to do whatever it takes to find out.

A bartender at a Boston pub pours Ward a drink. He welcomes him back. Moments later, Sunil Bakshi arrives flanked by a couple of HYDRA agents. Ward informs him that he wants to meet Whitehall. A short time later, Melinda May, Triplett, Hunter and Morse infiltrate the pub. The bartender is dead, as are the two Hydra agents. May finds Bakshi tied up in a back room, wearing Ward’s clothes. There is a note on the piece of duct tape covering his mouth. It reads: For Coulson.

Hank Thompson escapes from his bindings. Some deep-rooted training helps him assist Coulson in breaking free as well. Thompson rushes his family to safety while Coulson momentarily neutralizes Derik. A mighty struggle ensues. Skye and Mack arrive. They threaten to shoot Coulson, who has Derik trapped by the neck, but is not trying to kill him. He tries to get him to look down at the massive toy train design Hank Thompson had constructed. From above, it looks like the alien writing. Thompson had subconsciously built the train tracks to look like the writing as well as form a map. With the pieces that Coulson already has, he puts them together to see it leads to an Ancient City.

Coulson tells Hank Thompson the truth about his past and that he was a S.H.I.E.L.D. agent named Cameron Klein. He also offers him a job as they could use a good, former super spy like him. Thompson declines, telling him that he is happy being the family man he is now. He thanks Coulson for his second chance and gives him his card. As for Sebastian Derik, he is turned over to the proper authorities, but has found his peace. Coulson has as well. The compulsion to carve is gone. He can feel it. Now all he has to do is figure out why the aliens were so determined to get to that city.

Coulson vows that they will find Ward eventually. In the meantime, they will take advantage of his gift of Bakshi. Coulson addresses his team to assure them that he is not crazy. He has been trying to solve a puzzle, just like HYDRA. Coulson says their job is to find the mystery city before anyone else.

At his hideout, Ward shaves off his beard as well as a lot of his hair. He places a call to Skye knowing that she would answer Bakshi’s phone. He promises to keep sending gifts from time to time. Skye wants him to tell her where he is. That is not going to happen. Ward has some work to do. He packs up a duffle bag filled with supplies. He tosses a Global USA newspaper on top. Pictured on the front page is his senator brother. Ward zips up the bag over Senator Christian Ward’s smug, smiling face. 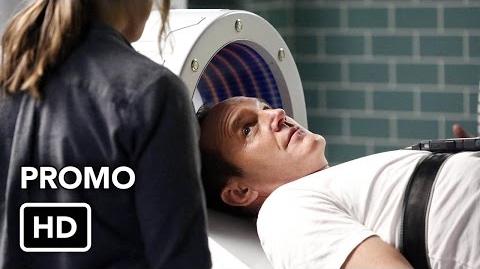 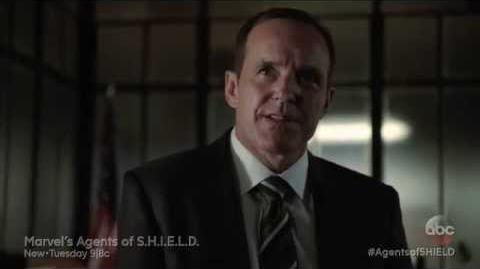 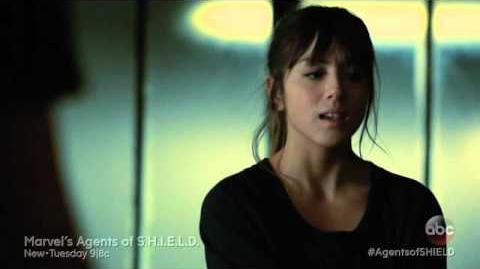 The Marvel Cinematic Universe Wiki has a collection of images and media related to The Writing on the Wall.