The One Who Will Save Us All

The One Who Will Save Us All

"I'm Earth's last hope, Phil. Its true protector. The one who can save us all."
―Glenn Talbot to Phil Coulson

The One Who Will Save Us All is the twentieth episode of the fifth season of the television series Agents of S.H.I.E.L.D..

A newly determined Talbot takes Coulson to meet the enemy and attempts to avert Earth's destruction.

Using his newly acquired powers, Glenn Talbot takes Phil Coulson and himself to Qovas' Ship. They encounter Qovas and Talbot demonstrates his powers to force Qovas and the Remorath to kneel before him, much to Coulson's bewilderment. As they round up the Remorath in the ship, Coulson finds a mourning Hale. He informs her that Talbot has infused himself with the Gravitonium and that they could use her help.

Hale agrees to join forces with Coulson and Talbot. She tells them how the Confederacy works and Talbot demands to meet the other members of the extraterrestrial alliance. At first, Qovas refuses, but upon learning that Talbot has somehow absorbed the Gravitonium the Confederacy seeks, he accepts to take Talbot to a meeting. Talbot is given a new suit to fit with the Confederacy's tradition and both he and Qovas leave with the ship's Phase Harmonic Teleportation Device while Coulson and Hale remain in the ship.

Talbot meets the other members of the Confederacy, who feel outraged by the presence of a mere human among them. Moreover, they learn that Talbot wants to renegotiate the terms of the deal struck between the Confederacy and HYDRA and that he wants a seat within the Confederacy. The Astran member, Crixon, firmly refuses to grant such an honor to a Human, but Talbot declares that he is no longer a simple Human and he murders Crixon by absorbing him into his own organism.

The other members of the Confederacy leave, except Taryan, the Kree representative who happens to be the father of Kasius and Faulnak. Taryan explains to Talbot that the Confederacy never intended to honor its part of the agreement with Earth and simply wanted to extort its resources before the attack from Thanos. Talbot declares that he should go fight Thanos along with the Avengers, but Taryan advises him otherwise and instead tells him to find more Gravitonium to absorb it and increase his powers.

Meanwhile, S.H.I.E.L.D. relaunches the systems of the Lighthouse and struggles to find out what to do in the aftermath of the Siege of the Lighthouse. While patrolling through the Lighthouse, Alphonso Mackenzie finds a living Odium-empowered Remorath, Qajax, who they decide to keep as prisoner. They interrogate him but cannot get answers before Qajax dies from the Odium effects.

Daisy Johnson returns to the Lighthouse and is confronted by Yo-Yo Rodriguez, who blames her for being away during the battle against the Remorath. However, Johnson refuses to listen to Rodriguez's accusations and the two women end up fighting each other. The duel is interrupted by Melinda May and Johnson brings the rests of her mother Jiaying to Jemma Simmons along with the Centipede Serum. Johnson orders Simmons to use it to create a cure which could save Coulson from his deadly condition.

Johnson returns to her room where she is visited by Deke Shaw. She expresses her disarray as the situations keeps getting more complicated. As Shaw unsuccessfully attempts to tell Johnson about how he feels about her, he discovers that she still loves her late boyfriend Lincoln Campbell. Figuring out that this is not the best time to talk about his own feelings, Shaw instead reveals that he is Jemma Simmons' and Leo Fitz's grandson.

Mackenzie works on the Zephyr One so it can be maneuvered in space in order to rescue Coulson and Talbot. When Fitz joins him, they have an argument about what happened during the Infiltration into the HYDRA Herefordshire Facility which caused Ruby Hale's death. While Fitz declares that there was barely a choice to make, Mackenzie retorts that they must go by S.H.I.E.L.D.'s principle and protect people, and that Fitz needs to be fixed.

Despite the argument, the Zephyr One is ready to be taken into space. May, Quake, Shaw and James Davis join the mission and successfully docks their plane to the Remorath spaceship. Quake and May make their way through the spaceship and find Coulson and Talbot, who returned from the Confederacy meeting. However, they discover that Talbot turned on them: his powers took the best of him and he became obsessed with the idea of increasing them, which led him to attack Coulson and to force him to kneel. As Quake and May arrives, Talbot threatens to kill Coulson if they do not stand down.

Quake tries to talk down Talbot, supported by Hale who claims that she trusts her. As Talbot begins mocking Hale's daughter Ruby for having failed to control the Gravitonium, Hale attempts to use the Faustus method to force Talbot to stand down. Although it seems to work at first sight, Talbot is now resilient enough to resist the mental programming. He murders Hale for betraying her, knocks Quake unconscious after demonstrating that her powers are inefficient against him and forces May to surrender. Coulson and May are taken prisoners while Quake is prepared to be delivered to Taryan. 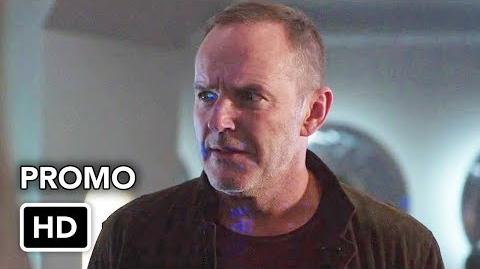 The Marvel Cinematic Universe Wiki has a collection of images and media related to The One Who Will Save Us All.