The Marvels is an upcoming superhero film, based on the Marvel Comics superheroes Captain Marvel, Monica Rambeau and Ms. Marvel. The film is a sequel to Captain Marvel, Avengers: Endgame, WandaVision and Ms. Marvel, and a crossover/sequel to Secret Invasion.[5] It is the thirty-third film in the Marvel Cinematic Universe and the tenth film of Phase Four. The film is set to be released on July 28, 2023.[4]

Marvel Studios' The Marvels will feature Brie Larson returning to the role of Captain Marvel/Carol Danvers. In the film, she’ll be joined by Teyonah Parris, who was first introduced as adult Monica Rambeau in Marvel Studios' WandaVision, along with Iman Vellani, who will appear as Ms. Marvel in the upcoming Disney+ series of the same name. Prepare to experience it and fly higher, further, and faster with the film, directed by Nia DaCosta![6]

In February 2019, before the release of Captain Marvel, Brie Larson revealed that there were already talks for a sequel. She also expressed her interest to see Kamala Khan/Ms. Marvel in that sequel.[21]

On March 3, 2019, Kevin Feige said that there were some "pretty amazing" ideas for a potential sequel to Captain Marvel.[22]

On August 5, 2020, Deadline reported that Nia DaCosta had been tapped to direct the film.[1]

On August 21, 2020, it was reported that film was scheduled to begin production in the United Kingdom in the late spring or early summer of 2021.[26]

On December 10, 2020, during Disney’s 2020 Investor Day, Kevin Feige announced that Iman Vellani and Teyonah Parris would be reprising their Marvel Cinematic Universe roles of Kamala Khan/Ms. Marvel and Monica Rambeau, respectively, in the film and that the film had been pushed back from its initial release date to November 11, 2022.[7]

On February 12, 2021, Deadline reported that Zawe Ashton had joined the cast of the film and that she would portray the film's antagonist.[17]

On February 18, 2021, Sean Bobbitt revealed that he had joined the film as the cinematographer.[27]

In March 2021, it was revealed that the film was scheduled to begin production on May 31 in London and Los Angeles.[28]

On May 3, 2021, it was revealed that the film had been retitled from Captain Marvel 2 to The Marvels.[6]

On August 10, 2021, in an interview with Siriux XM, Brie Larson revealed that the film had begun production.[29]

On January 13, 2022, Variety reported that Laura Karpman would be composing the score for the film.[3] 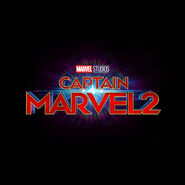