"Doesn't seem like a very smart plan."
"I have an inside man."
―Phil Coulson and Glenn Talbot

The Inside Man is the twelfth episode of the third season of the television series Agents of S.H.I.E.L.D..

Coulson and General Talbot are forced to team up and attend a worldwide symposium on Inhumans, where they suspect Malick has an inside man. As the S.H.I.E.L.D. team gets closer to the truth, an unexpected traitor is revealed.

Having now recovered with the doctors' help, Lucio is brought before Hive as Gideon Malick assures him he has been making moves this week to help him gain strength. Lucio paralyzes the agents but is unable to affect Hive who proceeds to infect Lucio the same way he infected R. Giyera.

In the early evening, Coulson meets with Glenn Talbot to discuss their new working partnership. His wife Carla is disapproving after the kidnap of her son. Lincoln Campbell watches on as he continues to learn to be an agent, and he notices a sinister man trailing Talbot. As the man closes in, Melinda May recognizes him as Carl Creel and she and Campbell close in to protect Talbot and Coulson. Just as Coulson wishes Talbot goodnight, Creel arrives and a fight ensues and Campbell and May bring him down, only to be surprised when Talbot says that Creel was not attacking, but protecting him. Talbot explains that they broke Creel's conditioning and have trained him to be a good and loyal bodyguard. Jemma Simmons asks Creel in his Containment Module about how he managed to survive the effects of the Diviner. They wonder whether his DNA could hold the answer to a cure for Terrigenesis.

Gideon visits "It" and discusses with him about a new host but Hive says that Grant Ward's body will suffice. Malick promises "It" there will be no more setbacks. After Malick leaves "It" orders Lucio and Giyera to bring five humans to him. He later uses them to repair Ward's body.

In the morning, Coulson's Team with Talbot and Creel set off to fly to Taipei, Taiwan for the Symposium on Alien Contagion of various world ambassadors. They believe that Malick has an inside man or woman working for him and plan how to infiltrate the officials' rooms to find out who they are. Hunter discloses to May how uncomfortable he is that the man who murdered his friends Isabelle Hartley and Idaho is walking free among them without punishment. He says that he cannot trust Creel. Talbot and Coulson arrive at the symposium. They begin to talk to attendees Anton Petrov, Xiao Chen and Ellen King in an attempt to work out who is secretly working for Malick. Talbot acts along so as to avoid suspicion as he is really the inside man, working for Malick under threat of his son's life.

At the Playground, Daisy Johnson gives Lincoln Campbell fight training in order to help him prepare for his upcoming test. The two end up on the floor in an intimate situation but are interrupted by Simmons, who asks for Campbell's help looking at Creel's blood.

Coulson, pretending to be "Dr. Sean Lundwall," teaches the officials about the Inhumans at the symposium, and the attendees all debate and discuss the contagion, trying to come to an agreement on how to act. Meanwhile, Coulson's agents investigate their rooms. At the symposium, Petrov suggests a home for Inhumans in Russia, arousing suspicion in Bobbi Morse because of his desire to have them all in one place. While investigating, Hunter notices Creel outside leaving his post and goes to stop him. May looks at Haruto Yakimura's room and Morse investigates King. She sees that she has an Inhuman under experimentation, but no connection to Malick. Hunter meanwhile finds a truck with the Suspension Gel chamber of George Talbot. As he attempts to warn his team that something is wrong, Creel surprises him, knocking him out from behind.

At the symposium, Talbot suddenly, to Coulson's shock and horror, announces that Coulson is a traitor in their midst. Gideon Malick enters, declaring him "Phil Coulson, the head of HYDRA," and having him taken away. At the Playground, Campbell watches as Simmons shows that Creel's blood reverses the effects of Terrigenesis. He is excited because he feels that not all Inhumans, such as Lash, deserve to go through the process. Johnson arrives and becomes angry however, believing Terrigenesis to be a birthright to all Inhumans. The two argue over the matter. Hunter wakes and distracts his assailants as Morse and May attack them from behind. The three then proceed to try to help Coulson and defeat the HYDRA agents.

Phil Coulson and Glenn Talbot are lined up to be shot by HYDRA soldiers when Malick turns back on his deal with Talbot. However, before hey can fire, Carl Creel attacks them and takes them out, rescuing the two of them. They go to reunite with May, Hunter, and Morse to fight back against HYDRA. As Hunter enters the symposium hall, he notices a sniper rifle trained on him, but Creel subdues the sniper before he can shoot. The team defeats the HYDRA agents, but Malick gets away to drive to the airport. Coulson sends Hunter and Morse to follow him.

In the Playground, Daisy Johnson visits Lincoln Campbell in his room to apologize for getting angry. He explains that he is jealous of the control of her powers, and the two make up and sleep together for the first time.

Coulson calls Hunter and Morse to find out where they are, but Hunter replies that they cannot talk, as they are hiding in the hold of Malick's private plane. Malick is flying with Anton Petrov to Russia. Petrov expresses his gratefulness for Malick's offer to help Russia deal with Inhumans. 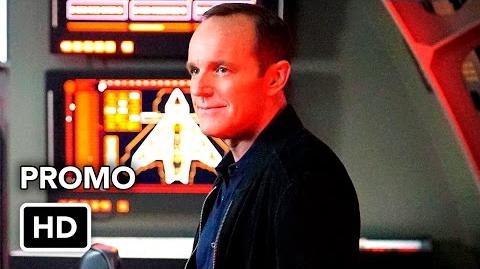 Marvel's Agents of SHIELD 3x12 Promo "The Inside Man" (HD) 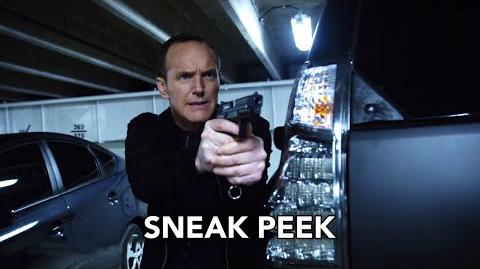 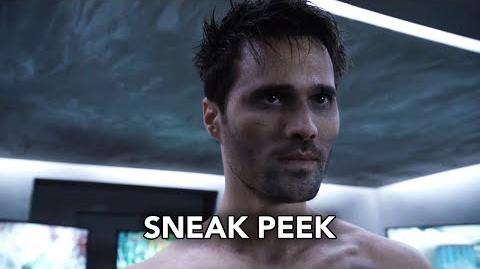 The Marvel Cinematic Universe Wiki has a collection of images and media related to The Inside Man.