"Maybe your mind is in there. It's just overcharged and can't process what's happening."
"I don't want to control it. I want to get rid of it."
―Betty Ross and Bruce Banner

The Incredible Hulk is a 2008 superhero film, based on the Marvel Comics superhero Hulk. A reboot of the Hulk franchise, it is the second film in the Marvel Cinematic Universe, and the second installment of Phase One. The film was released on June 13, 2008.

In this new beginning, scientist Bruce Banner desperately hunts for a cure to the gamma radiation that poisoned his cells and unleashes the unbridled force of rage within him: Hulk. Living in the shadows--cut off from a life he knew and the woman he loves, Betty Ross--Banner struggles to avoid the obsessive pursuit of his nemesis, General Thunderbolt Ross and the military machinery that seeks to capture him and brutally exploit his power. As all three grapple with the secrets that led to Hulk's creation, they are confronted with a monstrous new adversary known as the Abomination, whose destructive strength exceeds even Hulk's own. One scientist must make an agonizing final choice: accept a peaceful life as Bruce Banner or find heroism in the creature he holds inside--The Incredible Hulk.

Bruce Banner recalls the events in which he was transformed into a monster and hospitalized his lover Betty Ross. Ross' father, General Thaddeus Ross, forced Banner to go on the run for years, as he is now a fugitive of the United States Army. Banner finds a home in Rocinha, Brazil, where he works at a soft drink bottling factory and has learned breathing techniques and martial arts to ward off his transformations. He is trying to find a cure with the help of "Mr. Blue", whom he met online. Banner has not had an "incident" for 5 months.

When Banner has a cut, his blood drips into a bottle at the factory and is ingested by an ill-fated consumer in Milwaukee, Wisconsin. Ross uses this incident to pick up on Banner's trail and sends British special-ops expert Emil Blonsky with an attack team to capture Banner. Banner then makes an escape to the bottling factory he works in. During the run, he bumps into a gang of thugs, one who was his former enemy at the bottling factory. During the confrontation, Banner transforms into Hulk at the bottling factory and takes out the thugs and everyone on the team.

Before Hulk escapes, Blonsky, the last soldier alive, takes a good look at Hulk, before Hulk throws a forklift truck at him, which he barely survives. Banner escapes and goes to Guatemala, and then the US, where he finds the now recovered Betty Ross at Culver University, dating psychiatrist Leonard Samson. Banner's friend Stanley Lieber (a pizzeria owner) gives him a job as a delivery boy. He uses this job to continue his research by sneaking past a security guard at the university. Ross sees Banner at the pizzeria, and they later reunite.

Ross is informed by Blonsky that Banner escaped because of a green monster. Ross continues to explain that Banner was the monster, created by a failed experiment meant to replicate the "Super-Soldier" program. Blonsky volunteers to be given a small dose of an altered Super Soldier serum (another failed experiment but considered "very promising") that increases his strength and agility. Blonsky leads a second attack on Banner at Culver University, where he and his team encounter Hulk and are defeated. Hulk saves Ross from an explosion and he takes her to the Smoky Mountain National Forest.

Banner and Ross go to Grayburn College in New York City to meet Mr. Blue, who is revealed to be Samuel Sterns. Sterns invented a potential antidote, and Banner accepts it, despite the risks. Banner is restrained and a transformation is induced, but was successfully reversed through Sterns' antidote. Sterns revealed that he synthesized Banner's blood into a large supply, in hopes of using it in the next stage of human evolution. While Banner tries to convince him otherwise, he is suddenly tranquilized by one of Ross' snipers.

Ross and Banner are taken into custody, while Blonsky confronts Sterns and asks him to give him a sample of Banner's blood to add to his power. Sterns warns that the Super Soldier serum and Gamma Radiation together could create an "abomination", but Blonsky doesn't change his mind. The procedure transforms Blonsky into a Hulk-like monster who knocks Sterns into a sample of Banner's blood, and goes on a rampage through Harlem looking for something that could challenge his new strength as well as to lure Hulk out.

Despite his fears that he has cured himself of Hulk permanently, Banner is given permission to fight Blonsky and jumps from General Ross' helicopter in an attempt to re-trigger his transformations. Banner emerges from a crater in the street below as Hulk, and proceeds to face Blonsky. Hulk manages to defeat Blonsky after a lengthy, destructive and harsh fight while also protecting Betty and General Ross, who had been put in harm's way, but is again forced to run from the US Army.

Thirty one days later, Banner is in Bella Coola, British Columbia trying to learn how to control his transformations, instead of curing them. Later, Tony Stark arrives at a bar, where he finds a drunken and defeated General Ross. Upon acknowledging the recent battle in Harlem, the two discuss a "team" being put together. 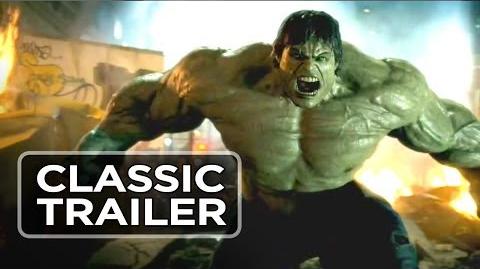 The Marvel Cinematic Universe Wiki has a collection of images and media related to The Incredible Hulk.