"On the plane, you're always telling me to think outside the box, so I went off book 'cause I was trying to watch their backs."
"Our team can go off book because there is a book. A Hub. An organization watching our backs."
―Skye and Phil Coulson

The Hub is the seventh episode of the first season of the television series Agents of S.H.I.E.L.D..

Dangerous secrets are being kept from Coulson's Team, and he works the system to save Ward and Fitz when they are sent on a Level 8 classified mission that may end in tragedy.

At an unknown location, a captured Phil Coulson is escorted to a torture room to be interrogated. When the interrogator arrives, Coulson informs him that his cover has been blown, revealing the interrogator to be a S.H.I.E.L.D. agent Shaw. Melinda May and Grant Ward arrive to take out the other men and free Coulson before making their way out of the facility. Together, the agents escape what is revealed to be an underground base in Siberia, where they use a pair of sleds to escape back to the Bus.

On the Bus, Jemma Simmons extracts a storage device from Shaw's nasal cavity, containing all of the intel that he had gathered. Coulson informs Shaw that they will be returning to the Hub with the information. Coulson informs the rest of the team, but notes that the data is clearance level 8 and beyond their priorities. However, Skye questions this, alarmed at being shut out of the process so quickly and that the rest of the team isn't privy to the same information as Coulson. Ward counters that every agent can't have the same information, claiming that it would make the entire organization vulnerable.

At the Hub, Skye asks Coulson if she can research S.H.I.E.L.D.'s data for information about her parents, but Coulson tells her they have more important things to do, but that he will look into it for her. Jasper Sitwell greets the group and tells Coulson, May, and Ward to join him for the briefing, locking Skye out again as Leo Fitz and Simmons opt to check out the science labs.

In the briefing, Coulson, May, and Ward are introduced to Victoria Hand, who informs them that the South Ossetian Rebels have developed a weapon called the Overkill Device, a device they plan to use to declare their independence from Russia and Georgia. Hand explains that the device is designed to create sonic vibrations that are powerful enough to trigger and disable enemy weapons from a great distance, a technology that poses a wide-sweeping threat.

Hand needs two agents to infiltrate the base and shut down the device. Ward and May volunteer to go, with Ward claiming he made contacts in Georgia during the incursion in 2008. However, Victoria states that she also needs someone who can understand the weapon and disable it on-sight, with only one agent on Coulson's team capable of doing it: Fitz.

Aboard the Bus, Simmons helps Fitz pack for his mission. Simmons worries about how he'll be going in with no backup, but Fitz assures her that he'll be fine. He humorously tells her not to do anything crazy such as jumping out of the plane.

Meanwhile in the Command Center of the Bus, May, Coulson, and Ward review the plan: Ward and Fitz will need to disable the device by 06:00 pm tomorrow and that once the device is disabled an extraction team will retrieve them. Coulson tells Ward to take care of Fitz, who has next to no field experience. As the meeting concludes, Fitz arrives with Simmons and Skye and tells Ward that he's ready. As the rest of the team prepare for Fitz and Ward's departure, Skye expresses her doubts about the mission to Coulson. He reassures her that the people who design these plans are the "best of the best".

Ward and Fitz arrive in the Caucasus Mountains to meet Ward's contact named Uri Dubrovsky. Before they enter, Ward tells Fitz that Dubrovsky doesn't like "your people" and tells him to be quiet and to keep his head down. The two enter the bar where Ward tells one of them that he's looking for Dubrovsky, only for the man to tell him that Dubrovsky is dead, and was friends with separatists, holding them at gunpoint.

In the lab on The Bus, Simmons expresses her concern about Fitz's safety to Skye and May. Skye prods May for an update on Ward and Fitz's mission, but May replies with a non-committal answer, adding that when they have new information they will react. Skye, not being able to stand being left in the dark, decides to get answers from Coulson.

At the Hub, Coulson and Hand discuss his recovery, noting that not all agents get sent to Tahiti, with Coulson once again strangely responding that it's a magical place. Coulson reassures Hand that Ward and Fitz will complete the mission.

Meanwhile, Ward and Fitz are restrained in a backroom of the Georgian bar. Ward goes over different ways to escape, but Fitz is not comfortable with any of them. Suddenly the leader Marta arrives, and while Ward and Fitz try to tell her that they are there to stop the separatist, she claims that they have given her no reason to trust them, and that trust is everything to her. However, before she can have them executed, the power to the bar suddenly goes out.

Skye catches up with Coulson in the hallways of the Hub. She tries to get answers from Coulson, but he coldly tells her to "trust the system". With no other ways to get answers, Skye decides to come up with a plan for her and Simmons to get the information they need.

Fitz manages to get the power back to the bar, earning the trust of Marta. The two manage to get a ride past the border in a truck. During the ride, Fitz reveals to Ward that he was the one who cut the power to the bar as part of his own plan, surprising the specialist. The truck is suddenly stopped, and attacked by a group of rebels, but Ward is able to escape with Fitz.

Coulson finds May alone aboard the Bus practicing Tai Chi. May remains silent as he confesses that he does not like hiding information from the team, but realizes that he must trust the system.

At the Hub, Skye instructs Simmons to access a control panel for her to hack in order to get information about the mission. Unfortunately, Simmons is caught and confronted by Sitwell. Simmons tries to act natural, only to panic and frantically subdues Sitwell with the Night-Night Pistol. Skye tells a reluctant Simmons to go get May to help while she goes to see what is on the drive.

As night begins to fall in Georgia, Ward and Fitz find a drainage pipe and decide to hide there and wait for the soldiers out. Fitz takes out a sandwich that Simmons had made for him. Ward grabs the sandwich and throws it away, claiming that there are dogs tracking them. The two start to argue, Fitz sarcastically calling Ward "Mr. Save the day". After a patrol rolls by, Ward tells Fitz that Coulson assigned him to take care of Fitz. He then gives the engineer an odorless snack bar.

When examining the hacked data in her bunk on the Bus, Skye discovers that no extraction plan has been prepared for Ward and Fitz once their mission is complete. Before she can take action, she is caught by Coulson. When he asks her what he told her, Skye responds that Coulon told her to "trust the system", and reveals that "the system sent Fitz and Ward to die".

Ward and Fitz hitch a ride on the underbelly of a truck using a MAG Pouch.

Walking with Coulson down a corridor in the Hub, Skye argues that she only hacked S.H.I.E.L.D. to make sure Ward and Fitz were okay. Coulson tells her that if she wants to be a S.H.I.E.L.D. agent, she must learn to keep secrets. When Skye asks if he knew that there was no extraction plan, Coulson refuses to answer and walks away.

Ward and Fitz infiltrate the compound and discover the Overkill Device.

In the Hub's command center, Coulson confronts Hand about hiding the fact that there was no extraction plan for his agents, claiming that as of being level 8, he had a right to know their safety was ensured. Hand points out that Natasha Romanoff and Clint Barton never have an extraction plan, only for Coulson to retort that they are aware of it going into the field. Hand simply tells him to trust the system.

Back at the compound, Ward tells Fitz to run him through how to disable the device and run, but Fitz tells him to stick to the extraction plan. Ward reveals that there never was one. Fitz refuses to leave, telling Ward that Coulson told him to take care of him, just as Ward was to take care of Fitz.

Skye, May, and Simmons prepare to extract Ward and Fitz against orders, with Coulson claiming he's helping also. Once Ward and Fitz disable the device, S.H.I.E.L.D. raids the base with Ward and Fitz fighting their way out. They are immediately surrounded, but May arrives with the Bus and subdues the rebels.

At the Hub, Hand reveals that she knew Coulson would extract his own team, which is why she had no plan in place. Later, Coulson tells Skye that he found the file on her parents, and reveals that it was a S.H.I.E.L.D. agent who left her at the orphanage. Skye emotionally thanks him for the information. Coulson reveals to May in private that he only told her part of the truth, and ask, for May's help in the rest.

Later, Coulson makes a phone call to gain information about his mysterious recovery, only for the agent to tell him that he doesn't have access to the file, despite his clearance level. 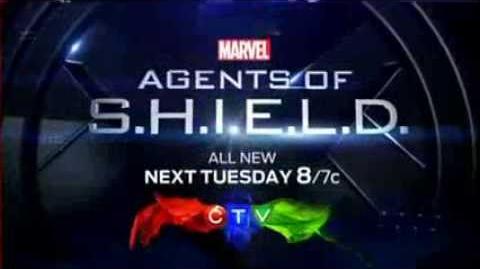 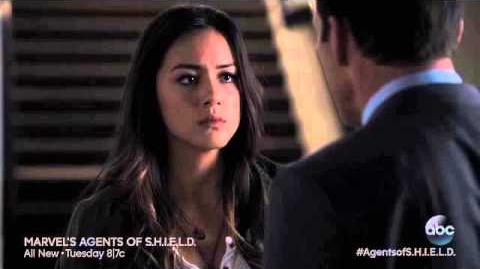 The Marvel Cinematic Universe Wiki has a collection of images and media related to The Hub.