"I'm sorry you never got that honeymoon you dreamed of."
"Nonsense. I'm protecting England from evil robots with the man I love."
―Leo Fitz and Jemma Simmons

The Honeymoon is the seventeenth episode of the fifth season of the television series Agents of S.H.I.E.L.D..

While an agent’s life hangs in the balance, Fitz, Simmons and Yo-Yo attempt to neutralize a weapon that could play a role in Earth's destruction.

Leo Fitz, Jemma Simmons and Yo-Yo Rodriguez arrive in Herefordshire, England, hoping to find the facility and the HYDRA weapon General Hale is looking for. As they prepared to chute from the plane, Fitz and Simmons casually notice that they could come to England for their honeymoon. Once on the ground, they locate the facility and infiltrate the premises, only to discover that the place is guarded by several Sleeper Mechs led by Anton Ivanov.

Meanwhile, Phil Coulson and Glenn Talbot still attempt to escape from the HYDRA Preparatory Academy. Slowly progressing through the snow, they are caught up by Ruby Hale, who attacks them with her Chakram. Coulson and Talbot run away, but Talbot falls onto the ground. As Ruby prepares to assault, she is violently attacked by Quake, who found them along with Melinda May and Deke Shaw. Quake orders May and Shaw to take Coulson and Talbot to the Zephyr One while she stays behind and fights Ruby.

Ruby explains to Quake that her goal is to defeat her. A violent fight erupts between the two young women, but in the end, Quake manages to overpower Ruby with her Inhuman abilities, knocking her against a tree. As Shaw, who remained behind to protect Quake, moves forward to confiscate Ruby's Chakram, he is shot in the shoulder by Hale, who arrives with several Sleeper Mechs. Nonetheless, Quake and Shaw manage to retreat to the Zephyr One. Quake and Coulson begin to tend to Shaw's wounds, but he needs real medical assistance and S.H.I.E.L.D. decides to fall back to the Lighthouse. En route to the base, Quake and Shaw argue about the latter's recklessness, but the argument ends when Shaw begins to spit blood.

At the Lighthouse, Piper finds Alphonso Mackenzie locked in a cell. Mackenzie explains that Fitz, Simmons and Rodriguez left the Lighthouse, but they have a more pressing issue to deal with since the rest of the team arrives with Shaw in critical condition. Piper and Mackenzie take Shaw to surgery in order to save him.

Coulson tells Talbot about their experience in the future, although Talbot has a hard time believing Coulson's story. May interrupts them and asks to talk with Coulson privately. May blames Coulson for his attitude, claiming that he looks like he somehow gave up on fighting for his life and that Quake is not ready to lead S.H.I.E.L.D. Eventually, May declares that Coulson should not decide on his own to sacrifice himself and that he must discuss such matters with the ones who love him. Thus, May admits her love for Coulson and angrily leaves, leaving Coulson puzzled.

Hale and Ruby return to the HYDRA Preparatory Academy, where Hale explains that she still intends to have Carl Creel help her understanding the properties of Gravitonium so she can use the Particle Chamber when she finds it. As Ruby remarks that Creel is not reliable and out of Hale's control, Hale retorts that the same goes for Ruby. As a result, Ruby is locked away in her room.

Later, Werner von Strucker comes to Ruby's room and informs her that he eventually pieced up everything he knew about the Particle Chamber. He suggests to leave and find it, but Ruby warns her that Hale will not let them. Von Strucker suggests that Ruby makes her own choice instead of obeying her mother. Therefore, Ruby has Hale come to the room and tricks her into sharing a mother-daughter moment, which Ruby takes advantage of to overpower her mother. Ruby and von Strucker then leave the Academy to find the Particle Chamber.

Quake comes to talk with Talbot, who is still quite disoriented and wishes to talk with his family, although she informs him that it will be difficult. Quake also asks Talbot to give her any information she might have on Hale and the place he was detained, as well as all the information about S.H.I.E.L.D. Talbot disclosed to HYDRA.

Fitz, Simmons and Rodriguez find the Particle Chamber and proceed to destroy the equipment required to make it work so that no one can use it. However, they wonder whether their actions could change the future as their previous selves might have taken the same decisions than what they are doing. As they talk about the future, Rodriguez reveals that her future self told her that the only way of saving the world was to let Coulson die, although Fitz and Simmons fail to understand why.

As Sleeper Mechs attack the room, Rodriguez attempts to take them down with her powers. However, this overloads her prosthetic arms with pain signals, keeping her from resorting to her abilities. As a result, Fitz and Simmons decide to stay behind and fight the androids together while Rodriguez leaves the facility and calls for backup. On her way out, Rodriguez encounters Ivanov. They fiercely duel against each other, but in the end Rodriguez successfully kills Ivanov, as he has his human head attached to his LMD body, which in turn disconnects the Sleeper Mechs Fitz and Simmons were facing.

However, Fitz and Simmons find out that they have a more fearsome enemy to fight. Indeed, Ruby and von Strucker eventually made it to the facility. Ruby wields her Chakram and threaten to kill Simmons if they do not repair the equipment they destroyed, and Fitz comments that they have no choice and that they actually never had one.

In the Lighthouse, Shaw is finally saved thanks to the surgery, although the anesthesia makes him speak nonsense and inadvertently and openly reveal his attraction towards Quake. Quake arrives seconds later and informs them that they located a radio peak associated with Sleeper Mechs, so they decide to go and investigate. Before departing, Quake visits Talbot one last time and gives him a secure phone for him to call his family. Talbot calls his wife Carla, however, unbeknownst to him, she has been found by Hale's assistant Candice Lee, who has Carla pronounce the sentences of the Faustus method to trigger complete compliance from Talbot. 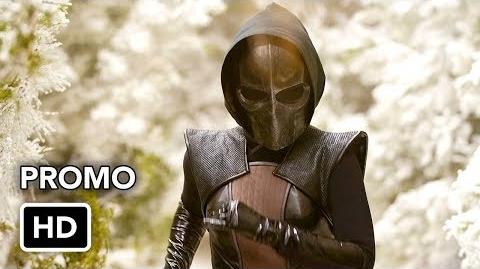 The Marvel Cinematic Universe Wiki has a collection of images and media related to The Honeymoon.