The Frenemy of My Enemy

The Frenemy of My Enemy

"Look, mate, we're infiltrating HYDRA. Our options are limited. Ward is a psychopath, but for now, he's our psychopath, so we use him to stay one step ahead."
―Lance Hunter to Leo Fitz

The Frenemy of My Enemy is the eighteenth episode of the second season of the television series Agents of S.H.I.E.L.D..

A dangerous new alliance is formed as Coulson and Hunter turn to the last person anyone would expect – Grant Ward! As the war between S.H.I.E.L.D. factions continues, Skye and Lincoln will find themselves drawn into this conflict.

In San Francisco, Leo Fitz uses Lance Hunter’s tips for losing a tail to make a getaway in a Quinjet from agents of Robert Gonzales who are following him. Once aboard the craft, he is surprised to see Mike Peterson in the pilot’s seat. He is further stunned to hear that Phil Coulson wants to make a deal with former agent and HYDRA mole Grant Ward. A meeting takes place in Tijuana, Mexico after Coulson captures Agent 33 in order to bait Ward. After Ward is removed of his weapons by Peterson, Coulson offers Ward the opportunity for the T.A.H.I.T.I. protocol if he can get him inside HYDRA. Ward agrees to the offer, and brings Agent 33 with him.

Plans are made to use a brainwashed Sunil Bakshi to get close to Doctor List. The entire meeting will be monitored through the Backscatter X-Ray Eye Implant of Peterson, who poses as Bakshi's bodyguard. It quickly appears as though Bakshi and Ward are pulling a double-cross, as Bakshi offers Deathlok to List and suggests putting him through Faustus. This leads to an intense showdown aboard the Quinjet. Once everyone calms down, the infiltration plan moves forward.

Meanwhile, Bobbi Morse and Alphonso Mackenzie wonder if Hunter may have been right about his allegiance to Coulson. A question of loyalties also comes into play after it is revealed that Fitz has the real Toolbox. Melinda May informs Morse of this, and Jemma Simmons is then asked to tap into Mike Peterson’s hardware to track down Coulson.

Ethan Johnston is dead after experimentation in a HYDRA hideout. Gordon learns Johnston is missing and consults Jiaying about it. They are interrupted by Skye, who fears the plan to send Calvin Zabo away will have violent repercussions. She convinces Jiaying to let her go as well to soften the blow of his not being able to return to Afterlife. She lets her unsuspecting father know that she would like to go with him on his trip.

Zabo and Skye are dropped off by Gordon in Milwaukee. They have an extended father-daughter chat about what their lives could have been like there. Once Skye gets an opening, she contacts May. She wants S.H.I.E.L.D. to come to contain Zabo before he loses control. What Skye does not know is that Lincoln Campbell has been keeping an eye on her from afar.

Doctor List speaks of a Quantum Entanglement bridge which basically describes the teleportation Gordon uses. List uses this phenomenon to track Gordon and those who have recently been teleported by him.

Elsewhere, Zabo brings Skye to his old office. He shows her his grandfather’s World War II field kit, which he used to put Jiaying back together. Skye finally has to stop Zabo from talking about his desire to turn back the clock, saying they need to move forward. When Campbell shows himself, Zabo realizes what is happening and he takes out his anger on newly arrived HYDRA agents.

Deathlok enters the office building with the HYDRA agents. He gets into a battle with Campbell. Hunter gets shot during the battle. Agent 33 gives him aid. When Simmons finally taps into Peterson’s hardware, she and May see that Coulson is working with Ward. Skye sees this, too. Before she can react, Skye is teleported by Gordon with Zabo hitching an unplanned ride.

Ward lets Coulson know that they are outmanned and outgunned. He needs to make a call as to what to do next. Coulson decides to surrender to Morse and Mackenzie. 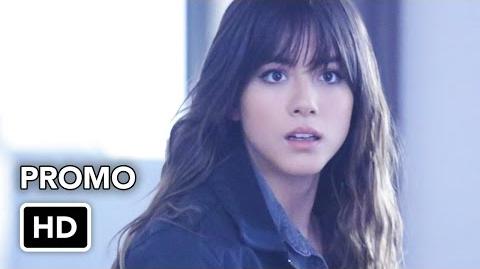 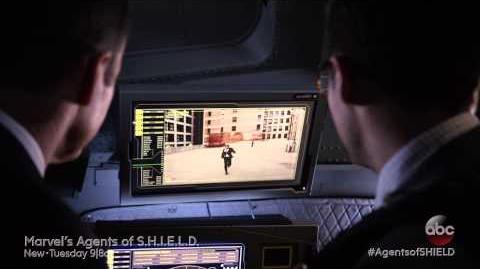 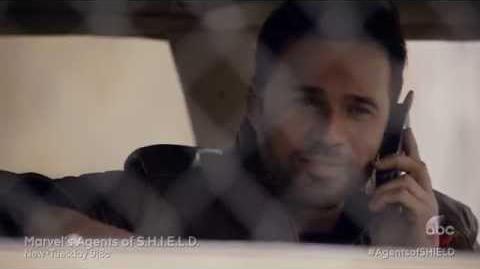 The Marvel Cinematic Universe Wiki has a collection of images and media related to The Frenemy of My Enemy.