"I've lived a life surrounded by heroes. None bigger than all of you. Since the day you joined, same as anyone in the line of duty. Heroes because you... because we sign up to lose each other. To get close to good people and have them taken away."
―Phil Coulson to his team[src]

The End is the twenty-second and final episode of the fifth season of the television series Agents of S.H.I.E.L.D., and the one-hundred and tenth episode overall.

Coulson’s life or death is the challenge the team finds themselves in, as the wrong decision will cause the Destruction of Earth.

The S.H.I.E.L.D. teams keeps arguing about what to do with the dose of the Centipede Serum brought back by Daisy Johnson. Yo-Yo Rodriguez insists on using it with the Odium to create a deadly weapon able to kill Glenn Talbot, being even ready to sacrifice herself. However, Johnson and Melinda May remain convinced that they should use it to heal Phil Coulson. The argument gets more serious as Rodriguez seizes the Centipede Device and begs her friends to listen to her. However, May ends the debate by destroying the Odium, thus leaving only one option: creating a cure for Coulson.

Rodriguez goes to visit Coulson in his room and Coulson tells Rodriguez that she advocated the right choice. In the meantime, the S.H.I.E.L.D. team prepares to intervene as soon as they will have located Talbot, who kidnapped Robin Hinton and her mother Polly to find more Gravitonium. Johnson has a final talk with Deke Shaw, who decides to leave the Lighthouse for a while to explore a world he never got a chance to live in. Before departing, Shaw advises Johnson to do her best to bring the team back together. The conversation is then interrupted by Piper, who informs them that Talbot is attacking Chicago.

Jemma Simmons visits Coulson as well and gives him the syringe containing the Centipede Serum combined with Jiaying's DNA. May joins them and request to privately talk with Coulson. May and Coulson discuss their relationship and May urges Coulson to take the cure so they can be together.

The team flies to Chicago, where Talbot dragged the remnants of Qovas' Ship and pursues his quest for Gravitonium, lifting massive columns of rock and causing great damage and panic in the city. During the flight, Johnson gathers the team and openly admits that she is not fit to lead S.H.I.E.L.D., as her actions made tensions arise within the team. As a result, Johnson decides to pass the mantle of Director to Alphonso Mackenzie. The decision is soon seconded by everyone else, including Coulson, who tells them that he feels better after taking the cure. Coulson gives Johnson her gauntlets and suit and they prepare for the upcoming battle.

S.H.I.E.L.D. informs the people of Chicago of their arrival, much to their relief. The team splits up: Simmons, Piper, and Rodriguez help to coordinate the evacuation into the Zephyr One; Mackenzie, May and Leo Fitz search the buildings to help endangered civilians; and Johnson, Coulson and Davis take a Quinjet to confront Talbot. However, Coulson reveals to Johnson that he will not come with her: indeed, he actually did not take the remedy. At first, Johnson refuses to go and face Talbot on her own, but Coulson convinces her that she is the only one able to do it. Quake leaves the Quinjet, but also angrily orders Coulson to return to the Zephyr One to take the cure.

Fitz, May and Mackenzie finds a crying Robin, who tells them that her mother is still imprisoned in the Remorath spaceship. Mackenzie decides to search the spaceship to find her while May remains with Robin and Fitz helps other civilians. However, when Fitz returns, he remembers that neither Polly nor Mackenzie survived in the future they saw. Therefore, May and Fitz go into the spaceship as well and rescue Mackenzie, who successfully released Polly but is being attacked by two Remorath soldiers. Fitz and May kill the Remorath and they all make their way out of the ship.

Meanwhile, Coulson passes out during the flight to the Zephyr One. Davis takes him to Simmons and Rodriguez. Simmons runs to find the syringe with the cure, but she cannot find it while Rodriguez does her best to reanimate Coulson. While going downstairs with her mother, Robin perceives that something is different than what she saw in her visions.

Quake rushes to Talbot and violently tackles him to make him stop his attack. As Talbot claims that he needs to power himself up to become a true hero, Quake insists that Talbot already is as a military man who enlisted to protect his country. Quake attempts to talk Talbot out of his madness and to convince him that they should work together, however, Talbot refuses to listen as Hale gave him the same kind of speech. Talbot grabs Quake and uses his power to take her and himself high up in the air before violently crashing her onto the ground. The crash releases a powerful shockwave which damages buildings, including the one where Fitz, May and Mackenzie were. A pile of rubble falls onto Fitz, who is buried beneath the debris.

Quake survives the crash, but she is still wounded and stunned by the attack. Talbot seizes her and intends to absorb her into his organism, enabling him to use her powers and access the Gravitonium more easily. As Quake is about to be absorbed, she discovers the syringe with the Centipede Serum in her gauntlets: Coulson gave up on the idea of healing and hid it to enable Quake to fight back against Talbot. Quake manages to inject herself with the serum right on time and using this power boost, she breaks free of Talbot's grip and violently propels him into outer space, where Talbot freezes to death. In the Zephyr One, Coulson regains consciousness.

Mackenzie and May clear the rubble over Fitz and prepare to bring him back to the Zephyr One. However, they realize that he is heavily wounded in the stomach and that he will not make it. Both crying, May and Mackenzie remain at Fitz's side until Fitz loses consciousness and eventually dies from his wounds. S.H.I.E.L.D. managed to change history and to avert the Destruction of Earth, but at the price of Fitz's life. Back to the Lighthouse, Simmons packs up Fitz's belongings and discovers that Shaw is gone, his fate with the timeline changed being unknown. Meanwhile, the fragment of the White Monolith in S.H.I.E.L.D.'s possession is destroyed.

The team gathers in the Zephyr One, where Coulson announces that he will retire from S.H.I.E.L.D. to fully enjoy the little time he has left. A commemorative plate is put into the Zephyr One and the team reflects on everything they have gone through since they began working together. Simmons gives Coulson the postcard Fitz signed when he looked for a way to find his friends in the future and Coulson tells Simmons that he is certain they will find him. Indeed, the team intends to look for the other version of Fitz who is supposed to be frozen in the Cryo-Freeze Chamber, waiting to wake up in 2091.

Coulson bids his farewell to his friends, expressing his assurance that Mackenzie will be a good Director of S.H.I.E.L.D. He shares an emotional moment with Johnson as both tell their love for each other, and Coulson then leaves them in Tahiti, where he plans to stay with May, who also retires. Coulson and May stand on a beach and plan their new life together as the Zephyr One flies away, taking the new S.H.I.E.L.D. towards new missions. 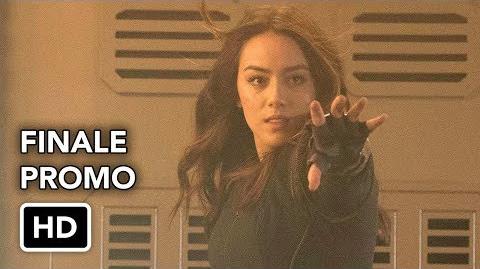 The Marvel Cinematic Universe wiki has a collection of images and media related to The End.

Retrieved from "https://marvelcinematicuniverse.fandom.com/wiki/The_End?oldid=870951"
Community content is available under CC-BY-SA unless otherwise noted.