The Cosmic Quest Volume One: Beginning

The Cosmic Quest Volume One: Beginning

The Cosmic Quest Volume One: Beginning is a book based on Avengers: Infinity War featuring Collector and Grandmaster. The audiobook version is narrated by Tom Taylorson.

A threat has emerged from the cosmos: Thanos. A ruthless warlord who plans to collect all six Infinity Stones. Joined by his formidable allies, he will be near-unstoppable at achieving his goal. The Avengers, the Guardians of the Galaxy, Doctor Strange and Spider-Man must join forces and fight side by side to stop Thanos, while the fate of the Earth and the universe lays in the balance.

This book features the stories of three of the six Stones as The Collector recovers from his run in with the Guardians of the Galaxy. Desperate to repopulate his vast collection of curios, he must contend with his brother, The Grandmaster, who comes to him after facing Thor and the Hulk. The pair squares off in a night of one-upmanship and speculate on the only things in the universe that would return The Collector to his former glory--the Infinity Stones. 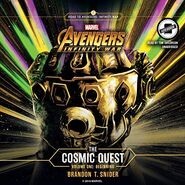