"Steve Rogers dedicated his mind, his body, his life to the SSR and to this country, not to your bank account. I made the same pledge, but I'm not as good as Steve was. I forgot my pledge running around for you like a corporate spy. So thank you, Howard, for reminding me who Steve was and what I aspire to be."
―Peggy Carter to Howard Stark

The Blitzkrieg Button is the fourth episode of the first season of the television series Agent Carter.

Peggy may be in more trouble than usual when fugitive Howard Stark suddenly returns for mysterious reasons. And Chief Dooley chases a new clue all the way to Europe that threatens to destroy Peggy's future at the SSR.

Roger Dooley decides that he wants more information about Sasha Demidov and Leet Brannis and how they turned up alive after the Battle of Finow, so he goes to the Nuremberg Prison in Germany to see Nazi war criminal Colonel Ernst Mueller. There, Mueller is assigned to be hanged, but Dooley convinces him to defy his captors and die on his own terms by taking a cyanide pill, after he gives Dooley the truth about what happened. Mueller tells Dooley that his regiment did not kill the Soviets; they found the men massacred upon arrival. Dooley leaves, giving Mueller the cyanide pill (in reality, a breath mint).

Meanwhile, Howard Stark has returned to New York City but is being held for ransom by subordinates of Otto Mink. Peggy Carter and Edwin Jarvis stage a rescue, but when they attempt to get Stark to his penthouse, Carter realizes it is being watched by the SSR. Carter decides instead to hide Stark in her room in the Griffith Hotel.

Meanwhile, Jack Thompson is put in charge of the New York Bell Company while Chief Dooley is in Germany. He wants the other agents to follow his leadership, but Daniel Sousa has leads of his own he wants to follow. Sousa goes to the pier where the anonymous tip was made to check for fingerprints. He hears two people gambling, one of which is a homeless veteran. Sousa suspects that the veteran saw something the night Ray Krzeminski died, but the veteran is uncooperative in his interrogation, not wishing to trust police. With alcohol and a hamburger, Thompson gets him to talk; he reveals that two people left the boat before the police arrived, describing them as a well-dressed man and a dark-haired woman. Sousa suspects that the woman from La Martinique is the same woman on the ship, and stares at the picture of the blonde woman until he decides to color the blonde hair black.

Carter returns to her apartment and questions Stark about his possession of Rogers' blood, punching Stark in the face and giving him a black eye. Stark tells her that he was entrusted with one of the twelve samples of Rogers' blood and wanted to use it as a panacea to save the world. Carter knows he wanted the blood to make money and is ashamed that Stark would soil their lost friend's legacy like that. She decides that she has compromised herself for Stark for the last time.

After killing his subordinates, Mink goes to the Griffith Hotel to assassinate Carter. Using guile to get Carter's apartment number from Miriam Fry, Mink approaches Carter's room when Dottie Underwood sees him. Mink threatens her with his Automatic Pistol; Underwood, who wants the gun for herself, launches herself off the walls and snaps his neck, killing him and taking the gun, while hiding Mink's body under her bedroom desk.

Carter uses a hammer to break a chunk of the wall behind a framed picture, and hides the vial of blood in the wall. Dooley returns from his trip, where Thompson tells him that a plane left Finow the day after the supposed massacre, and that Howard Stark's name is listed on the flight manifest. Dooley then notices the Remote Typewriter writing a message. 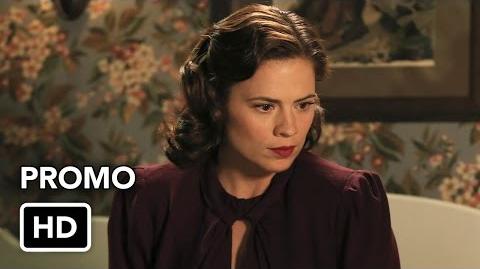 The Marvel Cinematic Universe Wiki has a collection of images and media related to The Blitzkrieg Button.