"Maybe your army comes and maybe it's too much for us, but it's all on you. Because if we can't protect the Earth, you can be damn well sure we'll avenge it."
―Tony Stark to Loki

Marvel's The Avengers, also known as The Avengers and Avengers Assemble, is a 2012 superhero film, based on the Marvel Comics superhero team of the same name. The film is a sequel to Iron Man, The Incredible Hulk, Iron Man 2, Thor, and Captain America: The First Avenger. It is the sixth film in the Marvel Cinematic Universe, and the sixth and final installment of Phase One. The film was released on April 25, 2012 internationally and on May 4, 2012 in the United States.

Marvel Studios presents in association with Paramount Pictures "Marvel's The Avengers" — the superhero team-up of a lifetime, featuring iconic Marvel superheroes Iron Man, The Incredible Hulk, Thor, Captain America, Hawkeye, and Black Widow. When an unexpected enemy emerges that threatens global safety and security, Nick Fury, Director of the international peacekeeping agency known as S.H.I.E.L.D., finds himself in need of a team to pull the world back from the brink of disaster. Spanning the globe, a daring recruitment effort begins.

After being exiled from the Nine Realms following his actions in Asgard, Loki wanders the periphery of outer space before coming into contact with The Other, the servant of a mysterious warlord. The Other makes a deal with Loki: in exchange for recovering the Tesseract, a powerful energy source being studied by S.H.I.E.L.D. on Earth, his master promises to give Loki command over the Chitauri, a warmongering race of cyborgs so that he may conquer humanity. Seeing this as a chance for greatness, Loki accepts. On Earth, Nick Fury, Maria Hill, Phil Coulson, Erik Selvig, and Clint Barton are called to the Joint Dark Energy Mission Facility in the Mojave Desert, where Dr. Selvig is researching the Tesseract. The Tesseract has recently begun emitting strange quantities of energy on its own accord, prompting the facility to be evacuated.

Before any necessary precautions can be made, the Tesseract activates, opening a portal from which Loki appears. Announcing his intention to conquer Earth, Loki steals the Tesseract. He uses the Scepter, given to him by The Other, to enslave the minds of Selvig, Barton, and several S.H.I.E.L.D. agents, aiding him in his getaway. Despite the efforts of Fury and Hill to stop him, Loki escapes. In response, Fury reactivates the Avengers Initiative.

Despite orders from the World Security Council to proceed with "Phase 2," Fury sends Natasha Romanoff to locate Bruce Banner, who has been living in Kolkata, India as a doctor. Agent Coulson is sent to recruit Tony Stark. Both of them are hired to help locate the Tesseract. Fury himself meets with Steve Rogers, informing him of Loki's theft of the Tesseract, requesting his help in recovering it and subduing the invader. All three men accept the offer, though Rogers is reluctant to do anything involving the Tesseract after his experiences with it in World War II. Banner is also hesitant to assist, fearing that his alter-ego, the Hulk, may cause mayhem.

The group gathers on the Helicarrier, where Banner starts tracking the gamma radiation emitted by the Tesseract, while S.H.I.E.L.D tries to find Loki. Meanwhile, Loki uses the scepter to communicate with The Other, who warns him that the consequences will be unspeakable if he should fail. Shortly after cutting off contact, Loki is discovered in Stuttgart, Germany. He attacks a man named Heinrich Schafer before terrorizing a crowd of people attending a gala, providing a distraction so that the brainwashed Barton may retrieve Iridium to stabilize the Tesseract. Romanoff and Rogers arrive to apprehend Loki, with Rogers and Loki engaging in an even fight until the timely intervention of Stark, who forces Loki to surrender. After capturing him, they board a Quinjet and start their return trip to the Helicarrier. A lightning storm suddenly forms, and Thor appears, transported to Earth by Odin and Heimdall's dark magic.

Thor takes Loki from the team's custody and carries him to a nearby forest. Thor attempts to persuade Loki into abandoning his campaign and returning to Asgard, but Loki, blinded by his jealousy of Thor and contempt toward Odin, refuses. Stark flies in and attacks Thor, engaging him in a battle that levels part of the forest. Before any further damage can be done, Rogers intervenes and attempts to get Thor to stand down. Thor responds by lunging at Rogers with Mjølnir, only for the captain's shield to absorb the blow. Thor finally agrees to work with the humans and joins them in bringing Loki to the Helicarrier.

On the Helicarrier, Loki is imprisoned inside a cage designed to hold Banner's Hulk. Fury attempts to interrogate him regarding the Tesseract's location, but Loki remains silent. Thor reveals Loki's plan to the Avengers: with the Tesseract, Loki hopes to open a portal that will allow the Chitauri access to Earth, thus beginning an alien invasion. While Stark and Banner work on locating the Tesseract, Stark is intrigued by Banner's level of control over the Hulk.

Rogers, annoyed by Stark's erratic behavior and disrespect toward authority, tries to get him to follow orders more carefully, which instigates a rivalry between the two. Amidst their arguments, they begin to question S.H.I.E.L.D.'s intentions, deducing that Fury is hiding something regarding their plans with the Tesseract. Stark reveals that he has started hacking the agency's mainframe to unlock their secrets, while Rogers leaves to investigate the restricted areas of the Helicarrier for himself. Both Stark and Rogers' investigations stumble upon "Phase 2", which they realize is a project aimed to use the Tesseract to make weapons.

The Avengers confront Fury with their discoveries, to which he reveals that S.H.I.E.L.D. began using the Tesseract to manufacture weapons in response to the incident with the Destroyer in New Mexico. A massive argument ensues, during which the brainwashed Barton, accompanied by various soldiers also working for Loki, attacks the Helicarrier, crippling one of its engines.

The resulting explosion destroys the lab where the group is arguing, causing Romanoff and Banner to fall into the boiler area, trapped by wreckage. Despite Romanoff's attempts at calming him down, the injured Banner transforms into the Hulk and chases Romanoff throughout the Helicarrier. Thor comes to her rescue and brawls with the Hulk, only to be outclassed in strength. A S.H.I.E.L.D. jet attempts to lure the Hulk away from Thor, only for the Hulk to leap at the plane and tear it apart. The jet explodes, and the Hulk is sent careening toward the ground.

Rogers and Stark try to repair the damaged engine, but Loki's underlings hinder their efforts. Romanoff confronts Barton, and after an intense fight, she is able to break Loki's control by delivering a concussive blow to Barton's head. Thor attempts to prevent Loki from escaping, but is tricked by an illusion of Loki and trapped in his former prison cell. Coulson tries to save Thor, but Loki stabs him through the chest with his scepter and then jettisons Thor from the Helicarrier. Thor breaks free from the cell at the last second, landing in a field. Rogers and Stark eventually overcome their aggressors and get the Helicarrier airborne again. However, the victory is bittersweet as Loki escapes and Coulson dies from his injury.

Fury attempts to use Coulson's death to motivate the Avengers into cooperating as a team, but Rogers and Stark get into another argument. However, the two realize that Loki plans to open the portal above Stark Tower, at the center of New York City, in an attempt to satisfy his ego. Rogers, Romanoff, and Barton take a Quinjet to New York City, following Stark in his suit. Stark arrives first, failing to stop the brainwashed Selvig from using the Tesseract to open the portal in conjunction with a device he built.

Stark confronts Loki. The two engage in a brief battle of wits, with Stark failing to intimidate Loki with his threats regarding the Avengers. Loki unsuccessfully tries to possess Stark, as his Arc Reactor physically blocks the scepter's power, and instead throws Stark through a window. Fortunately, Stark manages to activate his Mark VII armor, which attaches to Stark before he can hit the ground. Stark then attempts to incapacitate Loki, but Selvig's device initiates, opening a portal above New York. The Chitauri fleet emerges, beginning Loki's invasion.

Barton, Romanoff, Rogers, and Thor join Stark to destroy many Chitauri, but more poured from the portal. Banner arrives on a motorbike and uses a special technique to willingly transform into the Hulk. Hulk "smashed" a huge vehicle. Then Hulk beats Loki into submission. Meanwhile, the team fights hordes of Chitauri. Romanoff makes her way to Selvig's device. Selvig, now freed of Loki's control, reveals that Loki's scepter can close the portal.

Meanwhile, the World Security Council attempts to end the invasion by launching a nuclear missile at Manhattan. Iron Man intercepts the missile and takes it through the portal toward the Chitauri fleet before running out of power and plummeting back to Earth. The Hulk catches Stark as he falls, while the Chitauri fleet is decimated by the nuclear explosion, effectively disabling the Chitauri forces on Earth. Romanoff then closes the portal, the battle finally won.

The world, changed forever, is taken over by the idea of a superhero team. The Avengers become the center of media attention, admired by the public as heroes, but are also met with some concern and fear. Some find their appearance during the battle to be too coincidental. Joining in Central Park, the Avengers and S.H.I.E.L.D. watch as Thor escorts Loki and the Tesseract to Asgard. Afterward, the Avengers diverge, though Fury notes that at such a time that a new world-threatening menace emerges, the team will reassemble.

Meanwhile, The Other meets with his master, Thanos, and informs him of Loki's failure. He shares his concerns over the strength of Earth's heroes, commenting that attempting to rechallenge them would be deadly. Thanos smiles sadistically. Before disassembling, the Avengers gathered at an empty Shawarma Palace and ate in silence.

The Blu-ray release of The Avengers came with a Marvel One-Shot Item 47, that told the story of Benjamin Pollack and Claire Weiss who found a Chitauri weapon that they used to steal money from banks. 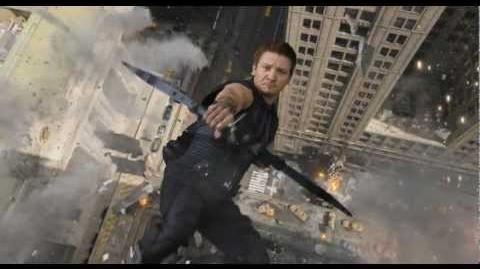 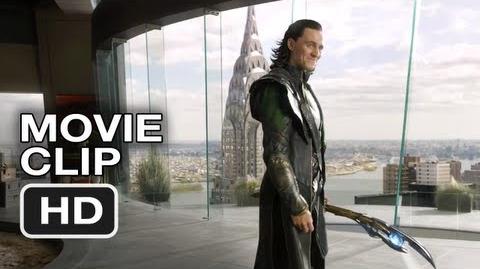 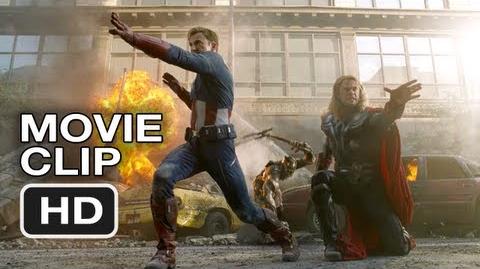 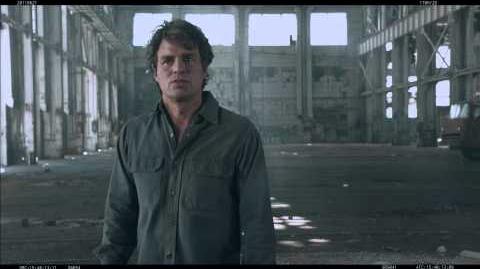 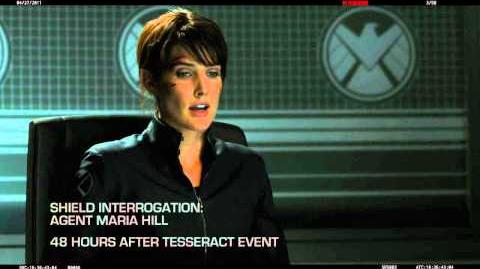 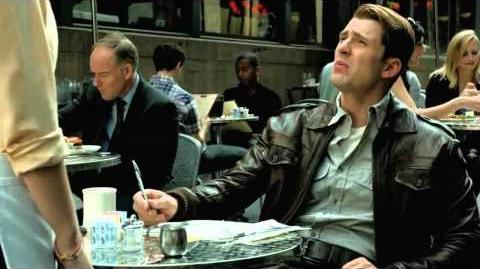 Marvel's The Avengers TV Spot - Together

Marvel's The Avengers The Intros

Marvel Studios' The Avengers - All the Facts - Disney+ Deets

The Marvel Cinematic Universe Wiki has a collection of images and media related to The Avengers.