The Art of Captain Marvel

The Art of Captain Marvel

Go behind the scenes of the highly anticipated Captain Marvel film with this latest in Marvel's ART OF series! Ace Air Force pilot Carol Danvers becomes one of the universe's most powerful heroes when Earth is caught in the middle of a galactic war between two alien races. This collectible volume is full of exclusive concept art and interviews with the creators behind Marvel's first solo super heroine. 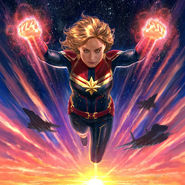 Concept Art by Andy Park used for the book