Thanos: Titan Consumed is a book base inspired by Avengers: Infinity War, relating a possible backstory of Thanos, but set in an alternate universe to the one shown in the movie. The audiobook version is narrated by Tom Taylorson.

Before creation itself, there were six singularities. Then the universe exploded into existence, and the remnants of these systems were forged into concentrated ingots…

Only beings of immense power can hope to wield these stones, but for those who are worthy, the powers of a god await.

Thanos is one such being. But he wasn’t always.

Born on a doomed world and cast out by his people for his genius, physical deviancy, and pragmatic but monstrous ideas, Thanos is determined to save the galaxy from the same fate as his homeworld… no matter how many billions have to die.

Learn the origins of the most formidable foe the Avengers, the Guardians of the Galaxy, Doctor Strange, and Black Panther have ever faced—a foe whom even a group of remarkable people, pulled together to fight the battles nobody else could, will fail to stop….

Dread it. Run from it. Destiny still arrives. 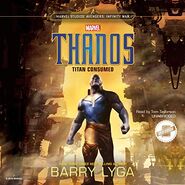