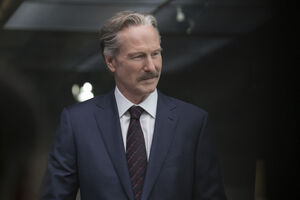 "Banner's work was very early phase. It wasn't even weapons application. He thought he was working on radiation resistance. I would never have told him what the project really was. But he was so sure of what he was onto, that he tested it on himself. And something went very wrong. Or it went very right. As far as I'm concerned, that man's whole body is the property of the US Army."
―LTG Ross[src]

"Damn it! We'd have had snipers on target in three more minutes. I wanna know who jumped the gun."
―LTG Ross[src]

"Here's something a bit more interesting. It's a possible gamma sickness. Milwaukee. A man drank one of those guarana sodas. Guess it had a little more kick than he was looking for."
"Where was it bottled?"
"Porte Verde, Brazil."
"Tell our agency people to look for a white man at the bottling plant. Tell them no contact; if he even sees them, he's gone!""
―Kathleen Sparr and LTG Ross[src]

"Is he a fighter?"
"Your target is a fugitive from the US government who stole military secrets. He is also implicated in the deaths of two scientists, a military officer, an Idaho state trooper, and possibly two Canadian hunters. So don't wait to see if he's a fighter!"
―Emil Blonsky and LTG Ross[src]

"Let me emphasize that what I'm about to share with you is tremendously sensitive, both to me personally and the Army. You're aware that we've got an Infantry Weapons Development program. Well, in WWII, they initiated a sub-program for Bio-Tech Force Enhancement."
"Yeah, super-soldier."
"Yes. An oversimplification, but yes. And I dusted it off, got 'em doing serious work again; bold work."
―LTG Ross and Emil Blonsky[src]

"You know, if I could take what I know now, put it in the body I had ten years ago, that would be someone I wouldn't want to fight."
"I could probably arrange something like that."
―Emil Blonsky and LTG Ross[src]

"You did the right thing, calling us. I need to know where they're going. She'll be in incredible danger as long as she's with him."
"From who?"
"He protected her. You almost killed her."
"I give you my word, her safety is my main concern at this point."
"You know, it's a point of professional pride with me that I can always tell when somebody's lying. And you are. I don't know where he's going. I know she'll help him, if she can."
"Then she's aiding a fugitive. And I can't help either one of them."
"I used to wonder why she never talked about you. Now I know!"
"Where does she meet these guys?"
―LTG Ross and Leonard Samson[src]

"Good to see you back on your feet, soldier."
"Thank you, Sir."
"How do you feel?"
"Pissed off and ready for round three."
―LTG Ross and Emil Blonsky[src]

"Federal is already monitoring phones, plastic and Dr. Ross' web accounts, and local PD have been placed on alert. They'll pop up somewhere and when they do, it comes straight to us."
"They're not gonna just pop up. He made it five years and got across borders without making any mistakes. He's not gonna use a damn credit card now. If he was trying to escape, he'd be long gone. He's not trying to escape this time. He's looking for help and that's how we're gonna get him. We know what they're after and we know he's been talking to somebody. You all have copies of the correspondence. The aliases 'Mr. Green' and 'Mr. Blue' have been added to the S.H.I.E.L.D. Operations Database. If he comes up for air, we'll be waiting. If he makes a peep, we'll hear him. And when he slips up, we'll be ready."
―Kathleen Sparr and LTG Ross[src]

"Betty."
"I will never forgive what you've done to him."
"He's a fugitive."
"You made him a fugitive to cover your failures and to protect your career. Don't ever speak to me as your daughter again."
"It's only because you're my daughter that you're not in handcuffs, too."
―LTG Ross and Betty Ross[src]

"Use that thing, soldier! Give him some help!"
"Which one?"
"Help the green one, damn it! Which one do you think? Cut the other one in half!"
―LTG Ross and a Door Gunner[src]

"The smell of stale beer and defeat. You know, I hate to say, 'I told you so,' General, but that super-soldier program was put on ice for a reason. I've always felt hardware was much more reliable."
"Stark."
"General."
"You always wear such nice suits."
"Touché. I hear you have an unusual problem."
"You should talk."
"You should listen. What if I told you we were putting a team together?"
"Who's 'we'?"
―Tony Stark and LTG Ross[src]

"Secretary Ross wants you both prosecuted. I have to give him something."
―Tony Stark to Steve Rogers and Sam Wilson[src]

"Ross has no idea I'm here, I'd like to keep it that way. Otherwise, I got to arrest myself."
"Well, that sounds like a lot of paperwork."
―Iron Man and Captain America[src]

"5 years ago, I had a heart attack. I dropped right in the middle of my batting swing. Turned out, it was the best round of my life because after 13 hours of surgery and a triple bypass. I found something 40 years in the army never taught me: Perspective. The world owes the Avengers an unpayable debt. You've... fought for us. Protected us. Risked your lives. While a great many people see you as heroes. There are some... who would prefer the word "vigilantes"."
"And what word would you use, Mr. Secretary?"
"How about "Dangerous"? What would you call a group of U.S.-based, enhanced individuals, who routinely ignores sovereign borders and inflict their will wherever they choose and who, frankly, seem unconcerned about what they leave behind them?"
―Thaddeus Ross and Natasha Romanoff[src]

"For the past 4 years, you operated with unlimited power and no supervision. That's an arrangement the governments of the world can no longer tolerate. But I think we have a solution. The Sokovia Accords. Approved by 117 countries. It states, that the Avengers shall no longer be a private organization. Instead, they'll operate under the supervision of a United Nations Panel, only when and if that Panel deems it necessary."
"The Avengers were formed to make the world a safer place. I feel we've done that."
"Tell me Captain, do you know where Thor and Banner are right now? If I misplaced a couple of 30 megaton nukes, you can bet there'd be consequences."
―Thaddeus Ross and Steve Rogers[src]

"Three days from now, the UN meets in Vienna to ratify the Accords. So, talk it over."
"And if we come to a decision you don't like?"
"Then you retire."
―Thaddeus Ross and Natasha Romanoff[src]

"What happens when the shooting starts, let them kill Steve Rogers?
If we are provoked. Barnes would have been eliminated in Romania if it wasn't for Rogers. There are dead people who would be alive now. Feel free to check my math."
―Natasha Romanoff and Thaddeus Ross[src]

"All due respect, you're not going to solve this with boys in bullet vests. You gotta let us bring him in."
"And how will that end any differently from the last time."
"Because this time I won't be wearing Loafers and a silk suit. 72 hours, guaranteed."
"36 hours. Barnes. Rogers. Wilson."
"Thank you, sir."
―Tony Stark and Thaddeus Ross[src]

"Did you get the files? Let's reroute the satellites, and start facial scanning for this Zemo guy."
"You seriously think I'm gonna listen to you even after that fiasco in Leipzig? You're luck you're not in one of these cells."
―Tony Stark and Thaddeus Ross[src]

"Stark, did he give you anything on Rogers?"
"No, he told me to go to hell. I'm going back to the compound instead. But, you can call me anytime. I'll put you on hold, I like to watch the line blink."
―Thaddeus Ross and Tony Stark[src]

"Still no word on Vision?"
"Satellites lost him somewhere over Edinburgh."
"On a stolen Quinjet with four of the world's most wanted criminals."
"You know they're only criminals because you chose them to call them that, right, sir?"
"God, Rhodes. Your talent for horse-shit rivals my own."
"If it weren't for those Accords, Vision would have been right here."
"I remember your signature on those papers, Colonel."
"That's right. And I'm pretty sure I paid for that."
"You having second thoughts?"
"Not anymore."
"Mr. Secretary."
"You got some nerve. I'll give you that."
"You could use some of that right now."
"The world's on fire, and you think all's forgiven?"
"I'm not looking for forgiveness. And I'm way past asking for permission. Earth just lost their best defender. So we're here to fight. If you wanna stay in our way... we'll fight you, too."
"Arrest them."
―Thaddeus Ross, James Rhodes, Steve Rogers and Natasha Romanoff[src]

"Are you hoping that as Secretary of State, General Ross would be able to facilitate these negotiations?"
"The General is no stranger to these types of incidences and he has long standing relationships with many of these heroes and was instrumental in spearheading the response to the emergencies at both Culver University and Harlem. He served this country with distinction for several decades. And I believe he can work with our allies abroad and along side these heroes."
―Christine Everhart and Thaddeus Ross[src]

"Your role is to act as a measured response to enhanced threats."
"And if I went anyways?"
"You did read the Accords before you signed them, right?"
"Of course."
"So you know that if you break the agreement, the law states I have to turn you over to Secretary Ross, and he won't hesitate to detain you on the Raft for the foreseeable future."
―Jeffrey Mace and Elena Rodriguez[src]

Retrieved from "https://marvelcinematicuniverse.fandom.com/wiki/Thaddeus_Ross/Quote?oldid=860126"
Community content is available under CC-BY-SA unless otherwise noted.