Guardians of the Galaxy Prelude

The Stygians are a race of tentacled bipeds that are deeply involved in organized crime.

Zade Scraggot, a Stygian crimelord, was involved in various crime-related riots at the Hub.[1]

Stygians are a humanoid race, with the most differentiating characteristics being their reptilian physiology, spike scalp frills, and various tentacles in the place where their arms should be. They have red, pupilless eyes and jagged teeth, making them look somewhat monstrous. 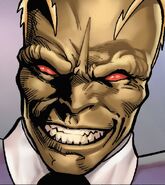 Sqqd'li
Add a photo to this gallery

Retrieved from "https://marvelcinematicuniverse.fandom.com/wiki/Stygians?oldid=599649"
Community content is available under CC-BY-SA unless otherwise noted.