Starodoub is a former General of the Russian Armed Forces and Mikhail Fjodorov's main business partner.

In the wake of the death of Mikhail Fjodorov, Starodoub sent some assassins to kill Natasha Romanoff who was blamed responsible for his death. After dispatching the thugs, Romanoff infiltrated Yuri Klementiev's yacht in Sochi, Russia, having obtained information about its location from Sofia. Romanoff went undercover as international model Marya Konn in a party inside the yacht when she came across both Klementiev and Starodoub.

General Starodoub was seen talking to Mohammed Yavari who was interested in buying missing bootleg Starktech from Hammer Industries, and then trying to maintain the calm inside the yacht when Romanoff simulated a fire to gain access to the room where the technology was being guarded.[1] 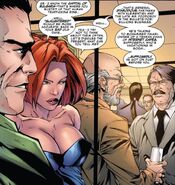 Retrieved from "https://marvelcinematicuniverse.fandom.com/wiki/Starodoub?oldid=1320997"
Community content is available under CC-BY-SA unless otherwise noted.