Agent Carter
*Now is Not the End
What If...?
*What If... The World Lost Its Mightiest Heroes? (recap)

"Please, it's not about me. It's not about you. It's not even about us. It's about legacy. It's about what we choose to leave behind for future generations. And that's why for the next year and for the first time since 1974, the best and brightest men and women of nations and corporations the world over will pool their resources, share their collective vision, to leave behind a brighter future. It's not about us. Therefore, what I'm saying, if I'm saying anything, is welcome back... to the Stark Expo!"
―Tony Stark[src]

The Stark Expo is an exposition located in Queens, New York City, that brings minds together from around the world and combines them to try and develop new inventions to improve quality of life for mankind and the world in the future. Created by Howard Stark, the Expo ran from 1943 to 1974, until it was revived by Tony Stark in 2010.

"Where are we going?"
"The future."
―Steve Rogers and Bucky Barnes[src]

Howard Stark, owner and CEO of Stark Industries, sponsored an exhibition of future technologies, the World Exposition of Tomorrow, that replaced the cancelled World's Fair in 1943.[1] Steve Rogers, Bucky Barnes and their respective dates, Bonnie and Connie, attended the Exposition. The Expo presented such inventions as Phineas Horton's Synthetic Man, and a prototype of a flying car by Stark Industries. Stark himself hosted the presentation of the flying car, an audience success despite the failure of the prototype.

Rogers attempted to enlist again during the presentation, leaving Barnes and the girls behind, but Barnes tried to persuade Rogers to not expose himself to such a risk. Rogers' strong moral convictions were the reason behind all those attempts to enlist, perceiving he had no right to stay behind when men were risking their lives fighting in the war, and Barnes, concerned about the well-being of his friend, asked him not to do anything stupid until his return.

Doctor Abraham Erskine of the Strategic Scientific Reserve overheard Rogers' conversation with Barnes about wanting to help in World War II, and approached Rogers to evaluate his motives of enlisting, directly asking Rogers if he wanted to kill Nazis. Rogers' five attempts of enlisting, and his motivations to not kill anyone, but help stop the war as he viewed the Nazis as bullies, impressed Erskine, who offered him a chance to enlist with a place in Project Rebirth, a decision which would lead Rogers to becoming Captain America and defeat HYDRA's leader the Red Skull.[2]

"Everything is achievable through technology. Better living, robust health and for the first time in human history, the possibility of world peace. I'm Howard Stark, and everything you'll need in the future can be found right here."
―Howard Stark[src]

In 1974, Howard Stark presented the City of the Future at Stark Expo, but was limited with the technology of his time so he couldn't complete it. Knowing this, Howard left the blueprints of a new element he developed hidden in the model of the City of the Future, and made a recording for his son Tony Stark with clues so he could find the blueprints and complete his work. His plan worked, and Tony brought it back to try and pull the world together with technology for the future.[3]

"We are coming to you live from the kickoff at the Stark Expo, where Tony Stark has just walked offstage. Don't worry if you can't make it down here tonight because this Expo goes on all year long. And I'm gonna be here checking out all the attractions and the pavilions and inventions from all around the world."
―Chess Roberts[src]

Tony Stark flew over New York City, only to land in the scenario of the Stark Expo and host its opening ceremony for a cheering crowd. Stark praised his own achievements as Iron Man, bringing the longest uninterrupted period of world peace. He talked about the purpose of the Stark Expo, the importance of their legacy, as organizations from all over the world would join efforts for the sake of a better future. While displaying his father's opening for the Stark Expo made in 1974, Stark went backstage to check his blood toxicity, having discovered that the Palladium core of the Arc Reactor in his chest was slowly killing him.

WHiH World News reporter Chess Roberts covered the event, informing that the Expo would be opened for a full year, and she would visit the pavilions, attractions and inventions presented to cover the news. Stark abandoned the Expo escorted by his bodyguard, Happy Hogan, while attending fans, signing autographs and greeting Larry Ellison and Larry King, coming across a beautiful woman standing by his car. The woman turned out to be a U.S. Marshal, who was waiting for him to give him a subpoena for the Senate Armed Forces Committee in Washington, D.C., and Stark, upset for the inconvenience, departed for Washington driving his own car.[3]

"Let's get this away from the Expo."
―Iron Man to War Machine[src]

Justin Hammer hosted his own weapons demonstration at the Stark Expo, with the name "In Defense of Peace", an event attended by military and civilian authorities, including Pepper Potts as the new CEO of Stark Industries. He seized the opportunity to criticize Iron Man for not sharing his technology with the rest of the world, and, in order to avoid the loss of human lives in the battlefield, he presented his new lines of Hammer Drones, each one representing a branch of the United States Armed Forces: Army, Navy, Air Force and Marine Corps. Adding that, despite this advancement, human presence would be necessary, he presented the War Machine Armor and its pilot, Lieutenant Colonel James Rhodes.

Tony Stark arrived at the Expo amongst a thunderous applause of the attending crowd, intending to evacuate the civilians in response to Vanko's threats, and to question Hammer about his collaboration with Vanko. Before he could obtain any response, Vanko remotely controlled War Machine Armor and the Hammer Drones to attack Stark. Pepper Potts accessed the backstage to check the situation, overhearing that someone was controlling the drones from another location, hampering the technicians from regaining control of the situation. Potts' assistant Natalie Rushman, the undercover identity of S.H.I.E.L.D. agent Natasha Romanoff coerced Hammer into confessing the identity of the responsible, Ivan Vanko, and his location, departing to Hammer Industries Headquarters while Potts called the police.

Iron Man battled the armies of drones, including one which he saved Peter Parker from, while avoiding War Machine's shoots to not harm his friend, while the drones started attacking the Expo to fulfill Vanko's desire of destroying Stark's legacy, endangering civilians in the process. Romanoff rebooted the system of Rhodes' armor at Hammer Industries Headquarters, just in time to avoid Rhodes killing Stark. Iron Man and War Machine then got surrounded by the Hammer Drones, battling them until Stark unleashed a laser weapon that tore the drones in half.

Romanoff warned them that another signal was approaching, and both Stark and Rhodes witnessed the arrival of Whiplash. Vanko's new armor resisted all the attacks launched to him, and he gained the upper hand, managing to constrain Stark and Rhodes with the whips of the armor. Seeing no other way, Stark and Rhodes mutually attacked each other with their repulsors, causing a explosion right at the spot where Vanko was standing. Vanko activated the self-destruct mechanism in his armor and the drones, causing a series of explosions in the complex that almost killed Pepper Potts, rescued by Stark in the nick of time.[3]

Pepper Potts announced in a press conference that, after all damage resulting from the Stark Expo incident had been repaired at the expense of Stark Industries, the relationship between Stark Industries and New York City would make another step towards the future, the construction of Stark Tower.[4]

In 2016, Happy Hogan drove Peter Parker past the Stark Expo's Unisphere on their way to the airport. Parker recorded them passing by on his cellphone, narrating about his trip.[5]

Make Way For Tomorrow Today was the theme song of the Stark Expo, with an instrumental version played during Howard Stark's video opening, and the full lyrical version playing during the actual expo.

Oh, a bright new morning is dawning
Make way for tomorrow today
Yes a new tomorrow's a morning
To light up a great new day 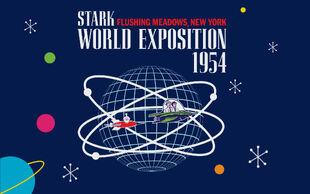 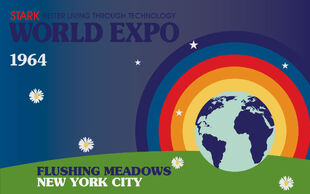 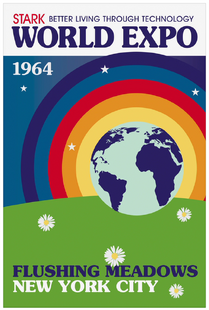 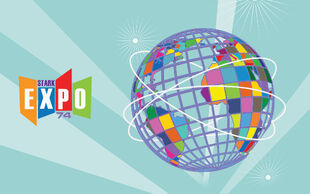 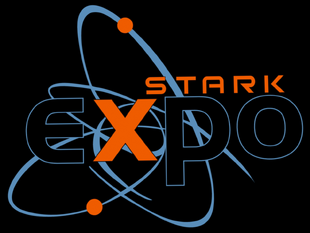 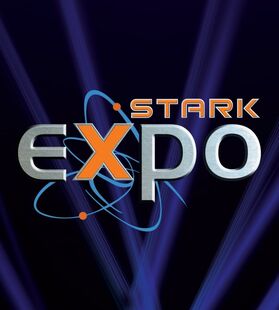 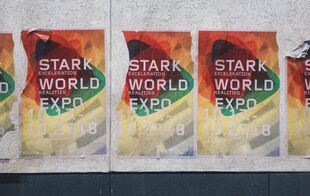 The Marvel Cinematic Universe Wiki has a collection of images and media related to Stark Expo.