Marvel Cinematic Universe Wiki
Register
Don't have an account?
Sign In
in: Articles with major spoilers, Articles to be expanded, Organizations,
and 2 more

The Soviet Armed Forces were the armed forces of the Soviet Union from their beginnings in the aftermath of the Russian Civil War to its dissolution on December 26, 1991.

During World War II, the Soviet Armed Forces had to fight against the numerous armies of Nazi Germany. By 1943, the tide of war turned against the Nazis, bringing victories for the Soviets.

In 1944, the United States Air Force plane flew over the Soviet positions around the German town of Finow, releasing the gas called the Midnight Oil in hopes of helping the Soviets crush the German resistance. However, the gas turned the Soviet soldiers into raving beasts, and most of them killed each other. That incident later became known as the Battle of Finow. The few surviving soldiers were later recruited by the Soviet spy agency Leviathan.

In 1945, somewhere in the Austrian Alps, a member of the Soviet Armed Forces found Bucky Barnes soon after he fell from a HYDRA train. This soldier eventually turned the wounded man over to the care of Arnim Zola.[1]

Affiliation with the Red Room

In 1946, a group of Soviet soldiers affiliated with Leviathan were stationed at the Red Room Academy.[2]

PPSh-41 - Used by the troops stationed at the Red Room Academy. 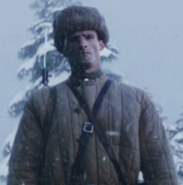