watch 01:47
Wiki Targeted (Entertainment)
Do you like this video?
Play Sound

"Every citizen is born exactly as designed by the community. Impeccable, both physically and mentally. We control the DNA of our progeny, germinating them in birthing pods."
―Ayesha[src]

The Sovereign are a highly advanced, genetically engineered galactic race who live on the collective of planets of the same name.

"Careful what you say around these folks. They are easily offended. The cost of transgression is death."
―Star-Lord[src]

The Sovereign had their homeworld attacked by a rampaging Abilisk that intended to devour the planet's power source. Believing it to be beneath them to fight it themselves, their leader Ayesha hired the Guardians of the Galaxy to kill the beast in exchange for Nebula, who was captured by the Sovereign for attempting to steal Anulax Batteries.[1]

"What is the delay, Admiral?"
"High Priestess, the batteries... they are exceptionally combustible, they could destroy the entire fleet."
"Our concern is the slight against our people. We hired them and they steal from us? It is heresy of the highest order."
"All command modules, fire with the intent to kill."
―Ayesha and the Sovereign Admiral[src]

After paying the Guardians for killing the Abilisk with Nebula, the high priestess Ayesha asked their leader, Peter Quill, about his heritage. After being paid a rude remark by Rocket Raccoon, several Sovereign advanced to arrest the Guardians. After the Guardians had left, the Sovereign realized that Rocket had stolen several Anulax Batteries. With this, they activated and dispatched the Omnicrafts to attack the Guardians.

Engaging in a massive space battle with the Milano, all but one of the Drones were eventually destroyed. The last drone was blown up by Drax the Destroyer, although not without the Milano suffering heavy damage.

Ayesha and her escort traveled to the Iron Lotus, on planet Contraxia, to hire Yondu Udonta and his Ravagers to capture the Guardians.

The Sovereign were contacted by the Ravager Taserface, telling them the coordinates to Yondu Udonta and the Guardians of the Galaxy. He told them to inform Yondu that he was the one who tipped them off. When he told them his name, however, the Sovereign just broke out laughing.[1]

"Uh... Captain?"
"What is it, Kraglin?"
"You remember that Ayesha chick?"
"Yeah, why? Oh, hell!"
―Kraglin Obfonteri and Yondu Udonta[src]

The Sovereign followed up on Taserface's tip and tracked the Guardians to Ego. Entering the planet's core, the Drones attacked the Guardians, heavily damaging their ship under heavy fire. Rocket caused the laser drills to rearrange themselves to fire on the Sovereign, only for the power to cut out due to a hit to the engine. Nebula plugged her cybernetics into the battery to repower the ship. Yondu Udonta then fired on the Sovereign, destroying the entire fleet. The Laser Drill was destroyed by a final shot from the last ship, causing Quill, Udonta, and Nebula to bail out.[1]

Next Step in Evolution

"That, my child, is the next step in our evolution. More powerful, more beautiful, more capable of destroying the Guardians of the Galaxy. I think I shall call him... Adam."
―Ayesha to her Sovereign Chambermaid[src]

The High Priestess Ayesha had mobilized massive means to capture the Guardians of the Galaxy during both the Escape from the Sovereign Fleet and the Battle on Ego's Planet, leading the Sovereign to find their resources heavily depleted. However, Ayesha did not give up on the idea of exacting revenge on the Guardians. She decided to create a new and "better" type of Sovereign and christened the new creation Adam.[1] 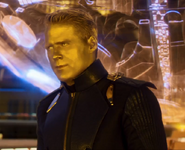 Adam Warlock (Unborn)
Add a photo to this gallery

The Marvel Cinematic Universe Wiki has a collection of images and media related to Sovereign.
Retrieved from "https://marvelcinematicuniverse.fandom.com/wiki/Sovereign?oldid=1149982"
Community content is available under CC-BY-SA unless otherwise noted.