Sleipnir is an eight-legged horse that serves as the All-father Odin's noble steed.

Sleipnir has eight legs and is unnaturally fast, which makes him the quickest horse of all Nine Realms. He is completely loyal to Odin, his master. In addition, Sleipnir served as Odin's companion during the era of Asgardian's expansion of the Nine Realms.[1]

Odin deployed Sleipnir to quickly reach Jotunheim, where his son and his other Asgardian friends, Sif and the Warriors Three were about to be killed by the Frost Giants.[2]

Sleipnir was being groomed by Odin when Thor approached him about how long it would be before the Bifrost Bridge would be repaired.[3] 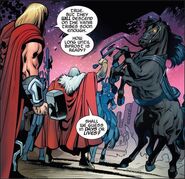 Retrieved from "https://marvelcinematicuniverse.fandom.com/wiki/Sleipnir?oldid=1193229"
Community content is available under CC-BY-SA unless otherwise noted.