"They're not human! Go for the face!"
―Alphonso Mackenzie[src]

The Sleeper Mechs were an army of humanoid robots used as shock troopers and bodyguards by the HYDRA remnants led by Hale, in her campaign against S.H.I.E.L.D.. They were the result of failed attempts by Anton Ivanov to create new Life-Model Decoys after the death of Aida.

"Hey, speaking of faces, how come your robo-warriors don't have any?"
"They are merely soldiers. Tools for battle."
"Interesting. 'Cause, see, I think when you lost your partner Aida, you lost the ability to make convincing LMDs."
―Phil Coulson and Anton Ivanov[src]

Sleeper Mechs were constructed by Anton Ivanov who was coerced by Hale to join HYDRA. Originally, Ivanov intended to re-create the Life-Model Decoys, however, he figured that he lost the ability to make the LMDS due to Aida's death. Admitting his creations as tools for battle, HYDRA used Ivanov's Mechs as shock troopers.[1]

Sleeper Mechs was stationed by HYDRA at the Principia, which was floating in the air, to secure a Cybertek shipment of Gravitonium. After the majority of the sample was safely transported off of the ship, several robots were left dormant in the ship as sentries, waiting to ambush any potential future intruders.[2]

During the Infiltration into St. Louis Aerospace Facility, the mechs accompanied Ruby Hale to ambush the S.H.I.E.L.D. agents, who were distracted by Piper. They held agents Yo-Yo Rodriguez, Melinda May, and Alphonso Mackenzie at gunpoint. On orders from Ruby, they attempted to execute the agents but were relieved of their weapons by Rodriguez. In reaction, the robots charged to engage the agents in hand-to-hand combat, holding S.H.I.E.L.D. back before the agents managed to escape, albeit with the loss of Rodriguez's arms.[3]

Several Sleepers accosted Werner von Strucker when he threatened Ruby. Once von Strucker reached an understanding with Hale and ceased hostility, the mechs forcefully escorted Strucker to his room.

The Sleepers left on the Principia were activated after sensing S.H.I.E.L.D. agents Alphonso Mackenzie, Daisy Johnson, and Phil Coulson on the ship. They awakened and attacked the agents, but were easily defeated before the ship plunged out of the sky. However, one mech was taken from the ship to the Lighthouse by Mackenzie.[2] 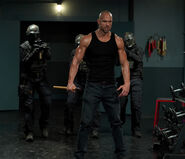 Retrieved from "https://marvelcinematicuniverse.fandom.com/wiki/Sleeper_Mechs?oldid=1052392"
Community content is available under CC-BY-SA unless otherwise noted.