"Welcome, recruit! As a S.H.I.E.L.D. agent, you must be confident that you can handle the heat of battle, and just as Director Coulson courageously umped from a Quinjet and dove through a portal, it's time you made your own leap of faith!"
"Killer pun!"
"Thank you."
―Ming-Na Wen and Henry Simmons[src]

Skydive Challenge is the third episode of the web series Agents of S.H.I.E.L.D.: Academy.

Frank Moran is brought to an airport. He approaches a monitor, on which Ming-Na Wen and Henry Simmons welcome him. Wen informs him that as a S.H.I.E.L.D. agent he would have to prove that he could handle the heat of battle, and that he must now make a leap of faith just as Phil Coulson courageously jumped from a Quinjet and dove through a portal. Simmons compliments May on her "killer pun" before telling Moran that his challenge is to jump from a plane at 12,500 feet and then guide his parachute onto a designated landing zone.

As Moran is brought up in the plane, Wen and Simmons give him some words of encouragement, and Wen is quite amused to discover that a man as tall as Simmons is afraid of heights. As Moran is about to make the jump, Brett Dalton contacts him and makes his challenge more difficult. Dalton states that Moran must answer a series of "True or False" Agents of S.H.I.E.L.D. trivia questions, but for every answer that he gets wrong the landing zone will become smaller.

Dalton tells Moran that HYDRA has no use for him after that pitiful response, and ends the communication.

Moran makes the jump and with words of encouragement from Wen and Simmons he lands inside the landing zone. They congratulate him and inform him that he will now play a S.H.I.E.L.D. agent of Agents of S.H.I.E.L.D.. He responds ecstatically and requests to do the jump again. 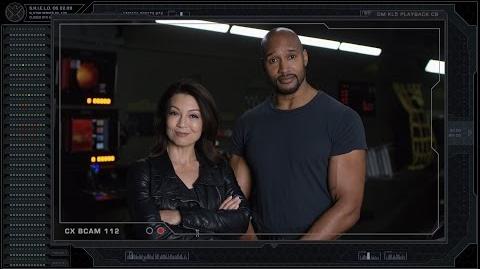 Marvel’s Agents of S.H.I.E.L.D. Academy – Skydive Challenge
Add a photo to this gallery

Retrieved from "https://marvelcinematicuniverse.fandom.com/wiki/Skydive_Challenge?oldid=951505"
Community content is available under CC-BY-SA unless otherwise noted.