"You are just one victim of the Skrull Expansion that has threatened our civilization for centuries. Impostors who silently infiltrate, then take over our planets."
―Supreme Intelligence to Vers[src]

The Skrulls are a technologically advanced race of reptilian humanoids, native to the destroyed planet Skrullos. They are notable for their shapeshifting abilities, which allow them to replicate other lifeforms seamlessly, and infiltrate planets without suspicion.

The Skrulls are a race native to their planet Skrullos. However, they eventually came into conflict with the Kree who demanded them to submit to Kree rule. However, the Skrulls resisted this, resulting in the Kree defeating them in a genocidal war and destroying their homeworld. The thousands of Skrull survivors used deception and their shapeshifting abilities to seek refuge on various planets by blending in with their populations. The Kree Empire began a propaganda campaign that depicted the Skrulls as evil invaders who infiltrate planets with the intention to conquer them in order to hunt down any Skrull refugees they could find. One faction of the Skrulls led by Talos found temporary refuge aboard a Kree cruiser hidden in Earth's orbit, being sheltered by Mar-Vell, who researched a way to build a Light-Speed Engine, hoping to provide transport to the faction away from the Kree's war. However, Mar-Vell was assassinated before she could complete her work, resulting in the refugees residing in her spaceship for six years.

In the 1990s, several Skrulls on Torfa were killed by Starforce during the ambush. However, Talos captured Carol Danvers as the rest of Starforce departed the planet.

Talos brought Danvers to their ship in order to read her mind with a memory probe. However, Danvers escaped, and killed several Skrulls. The fight caused her and the surviving Skrulls to crash land on Earth in California. Upon arriving, the Skrulls took human forms so they could find the Light-Speed Engine in the hopes of finding a new homeworld beyond the Kree's reach. Talos took on the human form of R. Keller.

Eventually, Talos and Norex arrived in Louisiana and established an alliance with Danvers and Fury at Maria Rambeau's house. Later, during a fight at the laboratory, Danvers, Fury, Maria Rambeau, and the Skrull warriors recovered many Skrull refugees and civilians, including Soren and Talos' Daughter, whom Mar-Vell had helped hide.

After defeating the Accusers fleet, Danvers decided to help the Skrulls find a new homeworld and search for Skrull survivors scattered throughout the universe.[1]

Because the Skrulls were known for their shapeshifting abilities, making them difficult to recognize if they were working undercover, it led to the development of Skrull detector technology. In 2013, one black market trader on Conjunction was selling Skrull detectors for ten units apiece.[2]

In 2023, a Skrull sent by Nick Fury infiltrated the ranks of the Federal Bureau of Investigation, and arrived at the aftermath of the Westview Anomaly for the sole purpose of recruiting Monica Rambeau for an intergalactic mission.[3]

In 2024, Nick Fury went on vacation in space on a Skrull flagship which had several Skrull occupants. While away on the ship, Fury tasked Talos and Soren to replace him and Maria Hill on Earth. In mid-2024, while in London, Talos informed him of giving the glasses to Peter Parker and the incident with Mysterio.[4]

"Whatever he runs on, it's not on the periodic table."
―S.H.I.E.L.D. Medical Examiner[src]

The Skrulls are a humanoid species with distinguishing features that include green skin and pointed-back ears. Unlike all species that are native to Earth, Skrulls are not carbon-based lifeforms and the elements they’re made up of aren’t known by scientists on Earth. They possess a wide variety of otherwise augmented abilities compared to humans, such as enhanced strength, durability and agility, but not to superhuman levels. It appears that the Skrulls possess a vast level of longevity, as Talos and Soren have not visibly aged in a 30-year span.

Skrulls are also able to shapeshift - or "sim"[1] - into other sentient humanoid beings right down to the individual's DNA, perfectly matching their height, voice, body weight, unique physical characteristics, and even copying their clothing - by way of Skrull co-morphing apparel. They are all physiologically capable of this, but accurate shapeshifting requires practice and talent. Skrulls are even able to replicate the recent memories of the person that they've simmed. However, they cannot mimick any supernatural or superhuman powers and abilities of the person they've simmed. 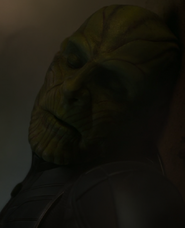 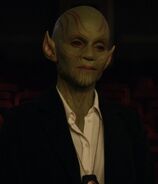 The Marvel Cinematic Universe Wiki has a collection of images and media related to Skrulls.