"Captain America! I've looked forward to this."
"Me too. I never get tired of taking down traitors."
―Shockwave and Captain America[src]

Lancaster Sneed, better known as Shockwave, is a former MI6 operative who later became a professional criminal and mercenary.

Lancaster Sneed was once a very egocentric secret agent working for the United Kingdom's MI6 agency. After being wounded in an explosion his body was surgically rebuilt using metal plates, enhancing his strength, speed, durability and agility. After stealing an exoskeleton body armor suit which gave him enhanced strength and was equipped with an apparatus that generated electrical shocks on contact, he became a professional criminal and mercenary, calling himself Shockwave.[2]

Shockwave's exoskeleton provides him with superhuman strength and electric blasts and armor. According to Falcon, he is powerful enough to power all of Times Square by himself. 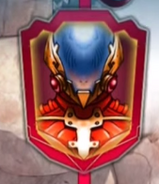 Retrieved from "https://marvelcinematicuniverse.fandom.com/wiki/Shockwave?oldid=1227632"
Community content is available under CC-BY-SA unless otherwise noted.