"Do I even need to ask?"
"Ask what?"
"Yeah, I guess you're right. I used to strap a chair to my ass and take long walks around the neighbourhood, too."
―Roger Dooley and Sheldon McFee[src]

Sheldon McFee is a truck driver for Daisy Clover.

Sheldon McFee drove a milk truck for Daisy Clover and would use it to commute. He struck a deal with Leet Brannis for use of the milk truck.

While posing as a health department inspector, Peggy Carter did a thorough search of the Daisy Clover Milk Factory and learned that McFee had been out sick for the past two days. Around the same time, the Man in the Green Suit interrogated Gino DeLucia, who told him McFee's address, before killing him.

After Miles Van Ert was captured by the Strategic Scientific Reserve, Roger Dooley promised him leniency if he gave them information about Leviathan's plot. He refused, and Jack Thompson beat him until he revealed everything he knew, including the use of the milk truck. Daniel Sousa contacted Daisy Clover and discovered McFee's address.

That night, Carter and Edwin Jarvis traveled to McFee's residence in New Jersey. Carter checked the milk truck and saw that it contained Nitramene, confirming it to be the same one that Brannis had used to escape from the Roxxon Refinery. Carter then found McFee in his living room listening to The Captain America Adventure Program. Upon noticing her, McFee attacked Carter and a struggle ensued which concluded with her knocking him unconscious. She then tied him to a chair, but Brannis then attempted to escape in the milk truck, at which point Carter and Jarvis apprehended him and forced him to drive back to New York at gunpoint.

Later, he left the house while still tied to the chair and awkwardly made his way down the road where he was discovered by Dooley and Thompson. They picked him up and asked what happened to him. McFee replied that they would not believe him even if he told them, but Dooley promised to keep an open mind; so McFee told them that a woman had attacked him and tied him to the chair.[1]

McFee was visited in jail by Strategic Scientific Reserve agent Daniel Sousa; Sousa showed him a picture of Peggy Carter, asking if she was the woman that fought him. McFee told Sousa about the incident and how she left with Leet Brannis and the Nitramene. Sousa pressed him, wanting him to be sure; McFee was positive.[2] 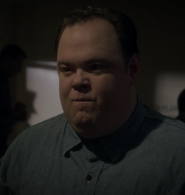 Retrieved from "https://marvelcinematicuniverse.fandom.com/wiki/Sheldon_McFee?oldid=1009662"
Community content is available under CC-BY-SA unless otherwise noted.