Shang-Chi and the Legend of the Ten Rings

Shang-Chi and the Legend of the Ten Rings is an upcoming superhero film, based on the Marvel Comics superhero of the same name. It is the twenty-fifth film in the Marvel Cinematic Universe and the second film of Phase Four. The film is set to be released on July 9, 2021.

Shang-Chi must confront the past he thought he left behind when he is drawn into the web of the mysterious Ten Rings organization.[2]

In 2001, Stephen Norrington announced that he had agreed to direct a film based on the Marvel Comics character Shang-Chi, describing it as "a real honest-to-goodness martial arts film, rather than a film that simply has martial arts in it."[6]

In 2006, Marvel Studios announced financing to produce the film, with the film set to be distributed by Paramount Pictures.[9]

On December 3, 2018, Deadline reported that Marvel Studios had hired David Callaham to write a screenplay which would modernize the character to avoid stereotypes while Marvel was looking at a number of Asian and Asian-American directors to helm the film, while also intending for the film to be Marvel's first superhero film with an Asian protagonist.[10]

On March 13, 2019, The Hollywood Reporter reported that Destin Daniel Cretton would direct the film following a shortlist that included Deborah Chow, Justin Tipping, and Alan Yang.[1]

On April 5, 2019, Marvel Studios announced that one of their upcoming films, believed to be this film, would shoot in Sydney and throughout New South Wales.[11] By the end of the month, it was reported filming would not begin until Eternals was finished shooting.[12]

On July 20, 2019, at San Diego Comic-Con 2019, Kevin Feige revealed that the title of the film would be Shang-Chi and the Legend of the Ten Rings and that it was scheduled to hit theaters on February 12, 2021. It was also announced that Simu Liu would play the title character, while Tony Leung Chiu-wai and Awkwafina would appear in the film as the real Mandarin and an undisclosed character respectively.[14]

On July 23, 2019, it was reported that Academy Award nominated costume designer Yee Chung-man had joined the film.[15]

On October 26, 2019, it was reported that a portion of the filming would take place in the United States, under the working title "Steamboat".[17]

On January 8, 2020, Kevin Feige revealed that the film would begin production soon.[18]

On March 12, 2020, it was reported that first-unit production on the film was suspended as Destin Daniel Cretton had undergone self-isolation and was being tested for COVID-19.[19]

On March 13, 2020, 24 hours after stating that second-unit production on the film would still continue, Walt Disney Studios suspended production on all its live-action projects, including Shang-Chi and the Legend of the Ten Rings, as a result of the COVID-19 pandemic.[20]

On March 17, 2020, Destin Daniel Cretton revealed through his Instagram account that he had tested negative for COVID-19.[21]

On July 1, 2020, Deadline reported that filming will restart at the end of the month in Sydney, Australia.[23]

On August 2, 2020, it was reported that work was being done on a set and that filming would resume in the coming days.[24] 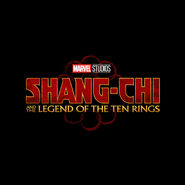 Chinese Logo Teaser
Add a photo to this gallery

The Marvel Cinematic Universe wiki has a collection of images and media related to Shang-Chi and the Legend of the Ten Rings.

Retrieved from "https://marvelcinematicuniverse.fandom.com/wiki/Shang-Chi_and_the_Legend_of_the_Ten_Rings?oldid=1284452"
Community content is available under CC-BY-SA unless otherwise noted.