Marvel Cinematic Universe Wiki
Register
Don't have an account?
Sign In
Advertisement
in: Articles to be expanded, Locations, Prisons,
and 4 more

Shang-Chi and the Legend of the Ten Rings (mentioned)

All Hail the King

"In here, you got no voice. You got no rights. You used to be a citizen, but from the moment you reached the bottom of stupid, your dumb asses belonged to the state of Georgia. If you are a recidivist, then you know the rules. If, however, this is your first visit to the Seagate theme park, let me just say: long as you follow the rules, you'll be fine."
―Albert Rackham[src]

Seagate Penitentiary is a correctional facility located in the U.S state of Georgia.

"Bloody hell, it's not exactly the Ritz, is it?"
―Trevor Slattery[src]

Justin Hammer was arrested and sent to prison for his collaboration with Ivan Vanko in the attack at the Stark Expo.[1] Trevor Slattery was later imprisoned in Seagate after being convicted for his part in the crimes committed by A.I.M. and Aldrich Killian.[2] Inside the prison, Slattery finally found the fame and notoriety he had always sought, gathering a strong and supportive fan-base amongst many of the inmates.

Although other prisoners did not respect him, as he was not even a real criminal. However, inmates such as Herman, whom Slattery appointed as his personal butler, protected and followed his orders as if he were a celebrity. Hammer was also jealous of Slattery's fame, arguing that while he had an army of robots, Slattery only has a "dumb accent."[3]

"I served time in federal prison, which turned out to be the best thing for me. I got clean, I rediscovered my passion."
"And then my Dad broke you out?"
"Exactly."

Xu Wenwu, the real leader of the Ten Rings, ordered his followers to kidnap Trevor Slattery and bring the actor to his presence. Jackson Norriss, a member of the Ten Rings, infiltrated Seagate Penitentiary disguised as documentary maker to interview Slattery. To maintain his cover, Norriss did a lot of research about Slattery's life and interviewed him many times, talking about the role of Aldrich Killian as his employer and the logistics of Killian's plan in creating an amalgam warlord.

On the last day of his interview, Norriss wanted to wrap out his film asking about the real Trevor Slattery, bringing him documents about his past, such as a photograph with his mother when he was a kid, and his role as a main character in a rejected TV pilot. When Norriss asked about the possibility that the Ten Rings or the Mandarin himself could be angered by his portrayal, Slattery was surprised to learn that the terrorists were real, as he previously thought that they were another aspect of the role A.I.M. created for him.

While relating the history of the Mandarin, Norriss retrieved a handgun he had concealed inside his videocamera, immediately killing the guards of the prison. Herman, who was accompanying Slattery during the interview, attacked Norriss, surviving his initial shot and fighting until Norriss was able to stab Herman in the neck. Trevor picked one of the guns from the corpse of a guard, and was able to aim it at Norriss before being disarmed. After regaining control of the situation, Norriss revealed that he was sent to break Slattery out of prison and take him to Xu Wenwu, extracting him while causing explosions and massive riots inside the prison.[3]

"Rule number one. You will obey every rule I say after rule number one. Rule number two. None but the righteous shall see God. And since we ain't got no righteous people in here, God ain't gonna have to worry about your shitty prayers. So that means I'm his mean, shitty substitute."
―Albert Rackham to Carl Lucas[src] 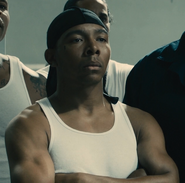 The Marvel Cinematic Universe Wiki has a collection of images and media related to Seagate Penitentiary.