The Screamers were genetically-engineered soldiers created by the HYDRA scientist Arnim Zola.

During HYDRA's occupation of Castle Zemo, Arnim Zola began experimenting on his own troops. By stimulating the brain with targeted electrical impulses, Zola was able to unlock the fabled power of telekinesis. However, direct connection of electrodes to the brain produced severe side effects such as seizures and violent vocal outbursts. He silenced the test subjects by stitching their mouths shut, with plans to create a control mechanism for their helmets. Zola had the Screamers placed in containment devices due to their savage tendencies, but planned further experimentation as he believed he would be able to unlock other powers such as mind control and remote projection of consciousness.

In 1944, the Screamers escaped their confinement and began slaughtering anyone they came across. An alert signal was sent through laboratories ordering an evacuation, announcing that emergency exits would soon be sealed and that any who did not escape in time should know that they died in the service of HYDRA. HYDRA's other mutated troops, the Wardens and the Scorchers, were sent in to end the crisis, but even they fell victim to the Screamers. Captain America was attempting to rescue his comrades in the Howling Commandos and found the Screamers massacring HYDRA scientists. The Screamers were formidable opponents, using their telekinesis against him and even using it to block his vibranium shield when he threw it. He was able to defeat them in close combat by smashing their breathing apparatus, and at long range could deflect their telekinetic blasts back at them with his shield.

Madame Hydra made plans to escape from the section of the castle occupied by the Screamers, ordering her troops to bring the healthier James Montgomery Falsworth and leave Dum Dum Dugan behind as bait for the creatures. Dugan was found by Rogers, who overpowered the Screamer that was about to kill him. Rogers freed Dugan and as they made their way to the freight elevator they were attacked by more Screamers, who Rogers fought and defeated.

The remaining Screamers were presumably killed when the castle collapsed once the Sleeper was destroyed.[1] 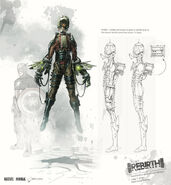